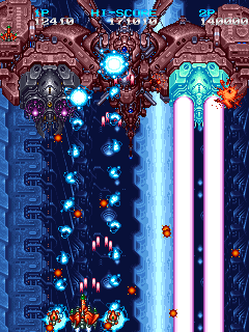 ​
​+
2-player co-op
Very good enemy variation overall
Great art direction overall
Homing beam weapon
Four (?) levels of upgrades
Some very large and detailed sprites, pretty good animation (shows larger enemy ships gradually falling apart as you damage them, some smaller ships moving in the far background of some levels), somewhat improved variation overall, improved sound quality (some later tracks aren't that memorable though), smart bombs (some skill required though as they do more forward damage and don't cover the entire screen's length), difficulty options (four levels, number of lives, point intervals for extra lives, coin worth (can't make coins worth more than 1 credit though)), pretty good bosses overall (bosses tend to have multiple destructible parts (however it seems difficulty to pick off individual parts for most of them - for example the level 3 boss's gun drones take about as long to kill as the boss itself), some have more than one phase - it's actually easier to wait out the third boss but it takes several minutes), little to no slowdown, can destroy a few enemy bullets, one hidden power up container (the raisin man (?) from Zero Wing called Pipiru - level 5), fairly impressive FM music overall (OPM/YM2151+sampler chip), several mini-bosses per level,

+/-
Long levels and unusually long overall length for a shoot 'em up (a bit too long for me, takes over an hour across six levels)
Steep difficulty curve
Power ups bounce around slowly and disappear after a while if you don't pick them up (would've preferred if there was an option to have them turn into bombs if you left them on screen)
Can't shoot power ups to make them change color
Bombs are very rare
The game punishes you for not dying with a rank system (more aggressive enemies and bosses, fewer bombs) and it's near impossible to beat in one life unless you use your bombs and weapons exactly right, frequent checkpoints (makes it hard to upgrade your ship if you died near or at a boss), no remixes of previous tracks, auto-fire option, no shield weapon here and the spread (green here) is weaker, lower top speed than in the prequel,

-
Hard to recover after just the first two levels or so (lose all upgrades including speed and you sometimes respawn where there aren't any new ones; you regain three bombs though at least)
The red and blue weapons sometimes make it harder to see enemy bullets (the shrapnel from some enemies when killed also doesn't help)
Trial & error (when to use what weapon and bombs, attacks from behind, some cheap attacks, boss patterns)
Loose horizontal scrolling when moving sideways
No manual speed adjustment
No weapon inventory (leads to uneven difficulty - the red weapon is more situational and the blue one sometimes aims at the wrong enemy yet the former seems the only viable option for the last two levels unless you die a few times and lower your rank), only three sub weapons and the main weapon can't be upgraded that much, no formation options and you can't make the homing beam change its target, some boring and/or repetitive parts, various enemies take quite long to kill even when fully upgraded (combined with the long levels it gets exhausting later on), fairly easy second boss and very tough third boss, no ending unless you beat it on Hard? (it just says "congratulations!" and goes to the second loop),