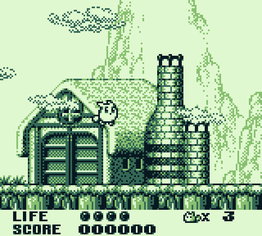 - Short, easy, no replay value (no difficulty options or secrets)

​
Review:
Trip World is a Japan exclusive platformer released in 1992 by Sunsoft, a developer known at the time for having pushed the NES hardware to the limit with several quality titles. Some of which have fallen into obscurity over the years. Remember Mr. Gimmick? No? An almost equally unknown game as Trip World, it was a platformer with excellent art direction, smooth control, engaging gameplay, and some of the best music composed for the console.

Well, Trip World is very much a Mr. Gimmick for the Gameboy, sharing many key aspects with it while adding some new ones and removing others. It features some of the most impressive visuals I’ve seen on the system with a clean, uber cute art direction (reminiscent of the Kirby games), fluid animation, smooth scrolling and highly detailed, varied backgrounds that wouldn’t look out of place even in 16-bit games of the time. It even has a couple of nice animated cutscenes, telling the story of the game without any use of text.

As you play you’ll notice how every area of the game has a distinct feel to it (no copy and paste level design here) and is inhabited by different creatures with different behaviors. I say creature, because most of them are not an immediate threat; bumping into them won’t hurt, and most will react to you only if you bother them first. You can affect creatures differently depending on which form you are in, and changing between them is done by a simple button combination or, in some cases by picking up a certain power up. Every area is also accompanied by its own music track and they sometimes change not only between levels, but even between screens, making sure you never grow bored of any track. The tunes all suit their environments well while staying catchy and hummable at the same time.

These things make the game feel almost like an adventure game and half the fun of playing it is interacting with each new creature you meet to see what it’ll do. At the end of each stage though, there is the typical boss battle to fight, and the road to them is almost completely linear. These battles are fun and all, but the format ends up feeling somewhat forced and kept thinking the game would have really benefited from a more open ended world.

The game is pretty easy. In fact it’s almost a cakewalk up until the very last level. Comparing the challenge to Mr. Gimmick, some of the tougher aspects of that game have been scrapped entirely here, such as the segments with bottomless pits (won’t miss those), various deadly traps, and sadly also the few puzzles you had to solve to reach hidden items. The game is also quite short, only taking me around 35 minutes to get through on my first time playing. I found this odd when games like Super Mario Land 2 and Kirby’s Dream Land 2 pulled off much larger game worlds and equally impressive presentations, all around the same time of release. The game has all the ingredients to keep players hooked even if it was about twice as long. Still, I enjoyed every minute of Trip World and I wholly recommend the game to fans of either Mr. Gimmick or any other games mentioned above.