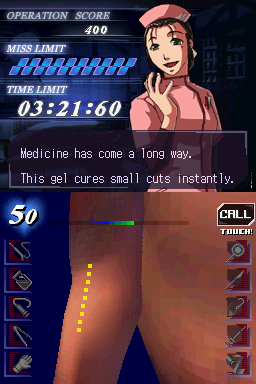 +/- Linear structure? (some parts like the cancer patient that gets worse after operation would've been more interesting if it could be avoided by picking up on some details but kept as an alternate route), very steep learning curve, no interactive dialogue?, short time limits (the patient's pulse also goes down and they eventually die - can halt this temporarily with a stabilizing injection and you can inject a lot without consequences but it eventually runs out), you don't meet most patients before operating on them and don't get to know anything personal about them (the latter makes sense but this creates a detachment to what you're doing), gore, can't play as a female doctor,

- Some control/interface issues (selecting tools is too slow considering the harsh time limits (should've had hotkeys, would've worked better on PC), glitchy incision controls near screen edges, inconsistent controls when draining fluids or thrombi (sometimes you've succeeded without an OK sign for the latter and without it it tends to look like you didn't complete the draining), drawing the star doesn't require much precision despite the game telling you so - more so speed, overly picky syringe filling controls (often doing it quickly means you get less fluid even if you did the same motion), the stitch sowing controls are pretty clunky (emulation only? it seems going quickly and not caring too much about making the pattern symmetrical as long as you do a zig-zag motion is the best route) and the game is very picky about how you should sow without showing you exactly how to do it, have to tap in the corner to proceed dialogue during an operation, have to draw a counter clock-wise circle to zoom while the game just says draw a circle, sometimes you're supposed to hold down the button/touch pen without the game telling you so, no encyclopedia of terms, ), can't redo a finished step that went badly (you get ranked right after performing a step fully), difficulty spikes (sometimes events occur that unexpectedly makes the patient's pulse go down very quickly), uneven visuals (some wounds and other things look pretty tacky, mediocre gameplay screen but nice adventure screen with the characters talking), no dialogue animation (still expressions), trial & error (sudden changes that you sometimes should've been able to foresee before operation such as the added polyp clusters in the fourth operation (throat), ), your second assistant is annoyingly critical and freaks out when some patients die between operations, can't do more than one thing at once (realistically you could let an assistant handle blood removal while applying the gel for example),