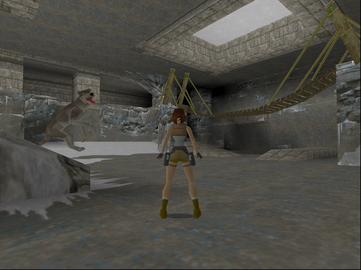 ​
+
Innovative controls (jump in four directions, context sensitive action button, auto-targeting in combat (Lara will turn her upper body to be able to fire while kiting an enemy), side stepping, flip (180 degree turn) move, walk toggle (run as default) - walking lets you not fall over ledges, look around by holding a button)
Can grab onto ledges PoP style
Very functional visuals
Higher res than the console versions
Can have twin stick-like controls using joytokey or similar (though not in the DOS/GOG version if using a PS2 dual shock - see below)
In-game gfx settings and fps display (these (F1-F4) don't work like the manual says though), pretty well done atmosphere (good sound design with music changes from silence to foreboding ambient to hectic for encounters or certain events, makes you feel isolated and vulnerable), some cool encounters (bear, t. rex, doppelganger), decent cutscenes in-between missions (pretty dated 3D models and animation, looks somewhat worse than Fade to Black for example), control and sound options, skippable cutscenes, nice tutorial (voiced tour around Lara's house; except it doesn't show how to fight or pick up items), many hidden items and rooms, fairly varied death animations, no loading screens (takes a few seconds per level on consoles), less grainy/pixelated textures and model edges than on consoles (there's also an HD texture mod for PC but it costs 10$), hotkeys for the saving and loading menus, some stats are displayed after beating a level (time taken, #/# secrets found), new gear sometimes shows on Lara's model,


+/-
Somewhat short draw/viewing distance (horizons become black) - sometimes adds to the atmosphere and feeling of isolation
Somewhat exaggerated voice sfx when perfoming acrobatics or taking damage
Have to manually draw your weapons
Linear structure (made up of separate levels with one goal each)
Fairly large exploration based levels (find keys or switches to progress)
Save anywhere with multiple slots (unlike in the console versions which had fairly scarce save points (that disappeared after one use!) instead; really helps with tedious platforming segments but makes the game a lot easier as well), some delay when jumping (see PoP, Another World etc.), auto-sliding down slopes, can't choose not to kill enemies and animals, can't eat animals, female protagonist (cartoonishly sexualized body, strong and independent behaviour, comes from a rich family), need to check Lara's head to see if she's targeting something (though it would go against the minimalistic UI it would've been useful to be able to turn on targeting boxes for targeted enemies), can't crouch nor crawl, unlimited ammo for the default weapon, fall damage (you die completely if you fall something like 10x Lara's height), one can occasionally see items through walls,


-
Slow sidewalking and shimmy (sideway climbing) controls
Very slow block pushing
Limited jump controls (somewhat unresponsive jumps (simply touching the button quicky won't always register), fixed jump height and length - the latter generally works well with the platforming segments though), somewhat stiff (partly hitting a wall or object when jumping or swimming stops lara as if you hit a wall in front of her with her entire body) and at times buggy hit detection (try jumping forward when standing in front of an object or wall), somewhat slow turning controls and you can't flip while staying in place, can't look around while moving or look down in mid-air (could've been solved by letting you do so if you were already moving when the look button is pressed, but keeping you in place if you stood still before pressing the button)
The game is too picky about positioning when pulling switches/picking up items/grabbing onto bridge ledges (breaks flow), sometimes can't grab onto and climb even a slightly angled ledge
Lots of dead space (and you can't sprint in this one) and some dead ends
No map (fade to black had a semi-transparent in-game map in the corner), no difficulty options, can't replay beaten levels or move backwards from the current level to the previous one, so-so voice acting and dialogue overall, minor cracks between polygons here and there (fewer than on consoles though), somewhat muted colors compared to the console versions (can probably be adjusted to similar levels), missing some music tracks from the PS1 version (bear encounter), can't cancel animations caused by falling longer than Lara's height or running into a wall, can't examine stuff like the mummy idol in the cave, somewhat bland and samey environments, some trial & error (aoviding spike traps, one secret involves shimmy-ing across the edge of a waterfall, enemies in narrow spaces or appearing right after you jump to a platform, some points of no return), Lara auto-dives when you jump into water (good in some cases but they could've done it so that you had to hold jump to dive or something), some backtracking (level 3/lost valley), no "back" button after bringing up the save menu with F5,


Bugs:
-Can't alt+tab out to desktop and ctrl+alt+delete sometimes makes the screen go black so you have to reboot the game
-Dual Shock analog controller doesn't work propery (need to plug it in after booting and getting to the main menu, can't use analog sticks)
​