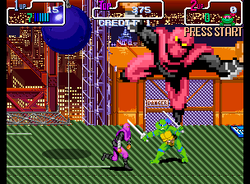 ​
+
2-player co-op (4 in the ARC game)
Difficulty options
Surfing stages
Good amount of moves (including throws, tackles and jump kicks)
Some good bosses
Throw into screen mechanic (borrowed from Battletoads) which is used for one of the boss fights, somewhat comical, good animation (slightly worse than in the Arcade game), less cheap than the Arcade game, changes Mudman to Slash and adds a fight with Bebop and Rocksteady as pirates, more aggressive and fast but also erratic foot soldiers compared to Hyperstone Heist (on Hard mode)

+/-
Shares some bosses with the prequel,

-
Slower than the Genesis/Arcade versions and with fewer sprites on screen
Double tap dash (instead of a button)
Repetitive (more so than the prequel on NES)
Less of a difference between specials than in the third game (Manhattan Project)
Some cheap hits (getting hit right after standing up)
Some trial & error (instant attacks - Leatherhead tail, rocksteady pirate (hits even when you're walking into the sword after he stabs in the air, Krang robot fist slam, rock soldiers tackling from off screen), sloppy hit detection at times (large hit box on some traps and enemy attacks), Super Shredder moves too fast (to be a fun fight) on Hard mode