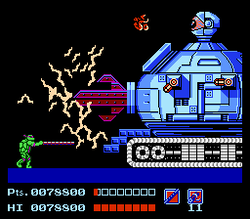 
+
Mini-bosses
Hidden items
Each turtle plays somewhat differently (mike and raph kinda suck though)
Secondary weapons (one type per turtle so you need to be careful not to pick up what you don't want)
You can deflect most shots by hitting them
Nice cutscenes, April/Splinter tells you what to do in the pause screen, map system (vague), ride the van

-
Sometimes glitchy enemy AI (skip jet pack enemies by ducking then moving past them, some enemies appear and then walk off screen making them disappear again, enemies ignoring the player and walking back and forth)
Slow jumping controls
The stage design doesn't take into account that you can attack through platforms and hit enemies from safe spots
​Simple bosses
Can't attack forwards while crouching
Can't give secondary weapons in inventory to other turtles, some cheap hits (enemies spawning right next to you and immediately attacking), trial & error (tricky jumps, boss patterns, underwater segment), slowdown, too many fast enemies on screen to avoid damage in some parts (no dodge or run move) unless you stock up on Scrolls (large ranged attack) and abuse the AI, sloppy hit detection (cars in overworld, spinning trap in dam section), clunky swimming controls (they're turtles!), somewhat loose scrolling (makes it hard to react to attacks because enemies spawn with their sprite fully on-screen instead of 'being there' before you move towards them), super annoying sfx when low on health, backtracking (some dead ends and a maze section), ropes could've been implemented in a more interesting way (instead of basically being keys), no save