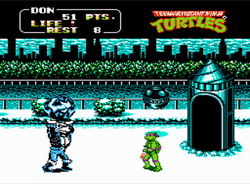 - Very limited fighting (just jump kick in JP version/2-player or do specials from below/above plane in 1-player (kills most enemies in one hit)), repetitive, can't adjust your jump height, somewhat slow walking speed (enemies are always more maneuverable than you), some trial & error (falling boulders, car traps, bamboo and ice traps, bosses), no differences between the turtles, all enemies are worth the same amount of points (1 - you gain a life every 200 points), uneven difficulty curve (starts out quite hard, then gets easier for a few levels, then hard again), in the JP version it only takes 1 jump kick to kill a foot soldier, sloppy and inconsistent hit detection (sometimes forgiving, sometimes unforgiving), the scrolling doesn't keep up (need to manually adjust if you end up close to the edge) with the players and jump kicking stops it entirely (leads to your avatar ending up too close to the edge of the screen to react to some attacks), no difficulty options, Baxter and Fly-man (?) are very easy bosses