Teenage Mutant Ninja Turtles II: Back From the Sewers (GB, 1991) 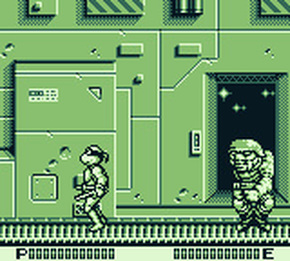 
​+ Difficulty options (easy, normal, hard), very good visual variation, well drawn and detailed backgrounds, great sound design, nice in-game cutscenes, some nice visual effects (soldiers jumping in from the foreground for example), small differences between the turtles (Don has the best range but slowest attack, Raph the shortest and fastest, Leo and Mike are somewhere in between), mixes in some autoscrolling (skate- and surf boarding) levels, cling to bottoms of certain platforms and climb up, pretty intense gameplay at times, decent voice samples

+/- Need to play bonus levels to refill your health after beaten levels (they're pretty easy but only appear if you didn't lose a life during the level (the turtle you played as gets captured and you need to beat the next level to save him)), checkpoints at the beginning of each sub level/segment, april is a damsel in distress, splinter flies the airship/zeppelin, quite hard even on normal difficulty, no overall time limit (sometimes it's best to take it very slow so as to not get overwhelmed), can't have more than four lives (also turtles have separate health bars but can't be switched between in-game like in the first NES game - see issue below), can't move while ducking, no proper dodge or run moves,

- Trial & error (only the turtle who played the bonus level gets his life refilled even if you collect more pizza than you needed for him (it isn't distributed to the others), boss patterns, surprise attacks from all directions, easy to miss the pizza (hp) in several segments), unforgiving hit detection (enemies hit right at the edge of your sprite while your weapon hits most enemies someways into its sprite) and tight timing required for a lot of parts later on in the game, sometimes inconsistent hit detection (if a boss is about to do a certain move it sometimes won't have a hit box when you take a swing at it, can't hit the robot bees from a certain angle), pretty goofy looking sprites overall (odd deformed look), somewhat short range even with Leo or Don, repetitive (while there's decent variation between segments almost every one of them goes on for too long (especially the air level)), pretty simplistic gameplay (no grab moves or throws, no combos, no sub weapons), near useless slide move (can be used to dodge a few things later on but should've been faster and more effective against most enemies), vertical based jumps (see Contra), sometimes uneven difficulty (spikes at the air level and final segment for example, sometimes no pizza for a while after a mini-boss, drops in a few other parts and the last bonus level),