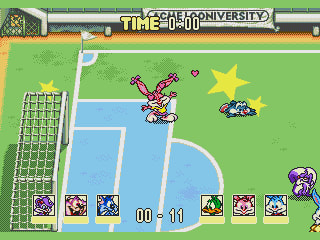 ​
+
Expressive sprites and great art direction+very good use of color, 4-player MP w/ team options (2 vs 2 or 1p & 2p & 3p vs cpu or 1p & 2p vs cpu or 1p vs 2p or cpu vs cpu demo), fast paced, story mode has pretty nice cutscenes and alternates between both sports+the mini-games, two sports in one (football/soccer and basketball)+three mini-games (obstacle course - kinda like micro machines on foot and you have to mash the button to run (also has four power ups: invincibility/knock others down, speed boost, slow down, randomly change position with other char), bowling - meh, montana hitting/whack-a-mole - decent in MP), password save in story mode (short), difficulty options (easy-very hard) and time per match options (2-5 mins), 12 different chars from the cartoon, 5 different settings (some have still or moving obstacles to avoid)
​
Football/Soccer: Each char has their own special move (for example plucky duck can grab the ball with his mouth and fly while dropping weights and furball the cat can balance on the ball to move faster and then do a quick shot; buster and babs have the same one though) - inspired by the Tecmo football games?, jumping flip kicks, three types of tackles (slide tackles, hard stationary tackle - hard to hit with and takes more stamina, tackle that makes opponent bounce upwards - see below)

+/-
Some of the special moves basically guarantee a goal, 3 (4 with the goalie in football) players per team only, can only pick between 4 chars in story mode (Buster Bunny, Babs Bunny, Plucky Duck and Hampton) but can pick who gets what position, can't jump during whack-a-mole and you can get hit twice in a row by bombs, unlimited continues?,

Football/Soccer: Context sensitive volleying/lobbing (have to be near the goal), gameplay in general works better in MP, stamina for each char - refills over the course of a match and is used for specials and tackles (a char can also be temporarily KO'd if they're tired), can basically tackle opponents like in an american football game without penalty (A without pressing a direction) but it's kinda tricky to time right, a jumping flip kick is pretty hard to pull off and you also often need to aim for the corner of a goal to actually score one, the goalie can also get tired and will then get temporarily KO'd for 5+ seconds if they take a hard shot to the head, plucky can get hit by his own special move, only scoring shots seem to count towards player "shot" statistics?, can't do a hard tackle during an opponent's corner kick

-
The mini-games are very bare bones - just one round of each can be played and then the game resets, no in-game moves tutorials, story mode is somewhat short and basic (9 levels in total and 3 of them consist of the mini-games, chars don't gain stats over the course of the game), no option to turn on fouls/offsides/penalties, the ball sprite actually passes above the goal when scoring a goal with a flip kick, can't skip the post-goal kick animation nor speed up/skip other players during bowling in 1-player,

Football/Soccer: The AI teammates are too unreliable (often neglects a free ball, sometimes the opponent can shoot and then be able to shoot again without any intervention from your teammates, doesn't keep up when you're nearing the goal so you have to stop and circle around an opponent to maybe get them in position in time if you're lucky, sometimes moves behind the goal), some control issues (the game auto-switches to the char nearest to the ball when the other team has it and you can't turn this off, can't move your chars while the opponent is readying a corner shot, the camera is a bit slow to move up/down when firing a corner shot to let you see player supposed to score the goal, can't jump and kick or headbutt the ball away from your goal during a corner shot near your goal, the window where you're able to pass someone is too brief (there has to be a "hey" symbol above the char) and the passes themselves are a bit slow - very hard to get a smooth passing chain going, if a teammate isn't already in position then trying to switch teammates right after lobbing the ball near the goal doesn't work and instead you jump for the ball with the same char - B both switches and makes you jump for a flip kick, a header is too hard to pull off to be worth it), near impossible to score a goal without either an assist or a special move, no manual goalie option), some trial & error (can't see a goalie's exact stamina level), it seems like a coin toss if plucky's going to align with the goal when his mouth loosens from his body and moves quickly forward - usually hits the top of it instead?, no option to turn on fouls/offsides/penalties, the player either can't do the special tackle that makes an opponent bounce upwards or it just isn't explained in the manual nor any guide (I was able to do it once by mistake (slide tackled from behind) but not consistently),

Basketball: Can't do assists in 1-player (have a teammate jump then pass them and make them shoot/slam dunk OR lob the ball and switch char then jump up and grab the ball to shoot/slam like in the football game) - 2-player? I've also seen the AI opponent do it a couple of times, similar control and AI problems - seems easier to get into a rhythm where one player scores and then the other one scores before the first one's team can get back and defend in 1-player (rinse and repeat), too hard to interrupt a ball that's on the edge of the basket


Bugs:
-Sometimes the AI auto-switches char for you in football though this is rare (happened twice right after the opponent's kick off for me - once it switched from plucky and once I couldn't switch to plucky)
​