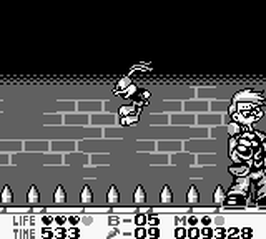 
+ A bit faster paced than the GB prequel (slower than the MD/SNES games though), somewhat better version of the run move from the SNES game (no charge meter and it's a bit slower, faster to activate - however you can't run up walls nor active it in mid-air here), hidden hard mode (a+start at the title screen - more enemies, less health to start with, bosses take more hits, somewhat different ending), three new mini-games, extendable lifebar (up to 4 hearts and you keep it after dying; need to land on Babs in the roulette mini-game though and it doesn't carry over to the next stage), pretty good cutscenes between levels, you can bounce on some enemy projectiles (sometimes over and over), some alternate paths (samurai temple), good art direction and decent animation, expressive sprites

+/- Somewhat stronger contrast in the visuals (more black/darkest monochrome tone), slight loss of control when breaking while running, frequent checkpoints (unfortunately you can't go back to previous areas in a level to get something you might have missed), unforgiving hit detection when jumping on enemies (especially the flying robot mice), stunning enemies (kick them) lets you use them as platforms (means you can't kill them for a few seconds though), can't save invulnerability power ups for when you really need them, limited continues (gain new ones by beating the sports mini-games), very hard to rack up lives by (not possible by collecting carrots? - counter resets after each level, points rarely give lives), no health drops from enemies and no health placed in the levels outside of the roulette mini-game (a shop would've been more convenient), fairly steep difficulty curve, you can break somewhat faster by simply letting go of the d-pad while running (this also lets you jump immediately so the break animation is kind of pointless to still have in the game), maze in the fourth level,

- Some control issues (running into a wall triggers a "knocked out" animation (about a second long), standing on a stunned enemy when it recovers makes you take damage, running momentum is lost when bouncing on an enemy, can't change directions in mid-air if you were running before jumping), fewer detours and alternate paths than in the first GB game, no options menu, can't switch between buster and other characters (duck and pig in the prequel though they only had slightly different forms of attack there and controlled the same), trial & error (autoscrolling rocket segment, rising water parts in the mansion, falling lamps damage you before falling, basketball mini-game (need to be extremely exact with your timing or daffy pulls his arms up again and it's a one frame animation - you can move to the sides instead though), can't look up/down, later boss patterns), having to go back and pick up enemy drops breaks flow a bit (the carrots can also fall into pits), buster's ear animation while walking looks a bit off, it's a bit annoying how the roulette game doesn't inactivate the slots that you've already landed on earlier in a level (so for example you can end up getting Babs twice which doesn't give you another heart (unless you're playing Hard mode), no crouching/swimming/wall jumping (see the MD game), some difficulty spikes (platforming parts where you're expected to quickly switch between running and walking, the soccer/football mini-game (it's like the one in EWJ2 but the ball is often dropped or bounces in a way where it's very tough to juggle more than one at a time)), somewhat bland final level (cool boss though)