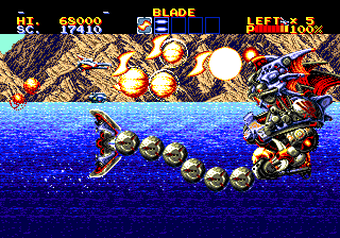 ​
+
Great weapon system (see TF3, every weapon has its use)
Respawn on the spot (lose just the equipped weapon and your gun drones)
Manual speed adjustment
Fast and intense
Some alternate paths through levels and they tend to scroll vertically
Special charge attack (gained after the first four levels)
Good length
Large and tough bosses
Most stages are three screens tall
Good use of colour (doesn't actually push the system to its limit though)
Some comical touches (first boss shoots of fireworks when beaten, lone ship ahead of huge bullet on final level), great art direction (very consistent style), difficulty options (and different endings, hard and above also adds some enemies)

-
Some slowdown (some of it seems built in - tried overclocking it in Regen)
Background graphics sometimes get in the way of gameplay
Somewhat uneven difficulty (very resilient bosses overall)
Trial & error (cheap hits like the giant bullet in final stage, boss patterns, sloppy hit detection on some walls)
Sometimes hard to tell if you are damaging a boss
Ssomewhat loose vertical scrolling (leads to more trial & error)


Comment:
Obviously a pretty big leap from the prequel in several ways. The developers had really mastered the MD hardware at this point and their talent and attention to detail is visible throughout every aspect of the game, from the tough and intimidating bosses to the impressive and catchy FM soundtrack. It's not my favorite in the series though, the main reason being that I thought the devs at Technosoft overdid it a bit when trying to make up for the low difficulty of the prequel, to the point where some parts become a chore to play unless you know exactly how to tackle them. Still, it's a game worthy of being on anyone's top list.