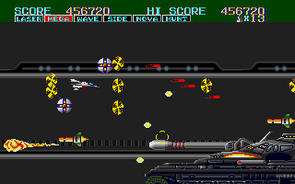 +/- Respawn on the spot but lose all collected weapons, power ups can get stuck inside walls

- Repetitive overhead levels with poor control (no speed adjustment, no map), somewhat underwhelming final boss, no speed adjustment (except for the final level where DES acts like a speed upgrade), some distracting backgrounds, some trial & error (closing walls in stage 4, stage 8 speed tunnel, boss patterns), need to press A to continue (pressing Start makes the game go back to the main menu), power ups disappear when going off screen in the overhead levels (happens quite easily when you're focusing on fighting enemies)


Notes:
Audio is streamed from CD in the Gold Pack Saturn version and fades out at the end of each loop (throws you off since the original game switches music for bosses), some sfx are replaced by samples which are sometimes a bit muffled 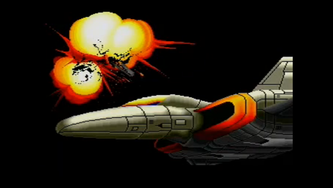