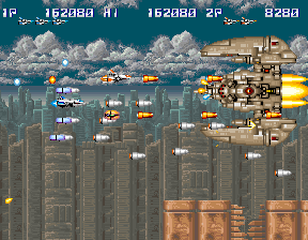 + Sometimes intense action, 2-player co-op, some large sprites, great use of its board's sound hardware (FM-based), 1-4 gun drones (they're invincible), good weight to the weapons, some cool special weapons (bouncing projectiles, flamethrower, napalm), adjustable drone formation (only how close they are to each other and to your ship), decent variation

+/- Plays and looks a lot like Gradius, only one weapon shoots backwards, power ups turn into question marks (these give points?) when an ammo-based special weapon is equipped (means you can't change weapons without using up all the ammo)

- Credits stop working after reaching the final stage, need power ups to increase ship speed, slow auto-fire, nearly impossible to recover after death later on (respawn on the spot but lose all weapon and speed upgrades), ammo-based special weapons are too strong against bosses (and usually easy to have equipped when facing them), power ups always cycle in a certain order making some weapons harder to get while not necessarily being the best ones (though the laser is very useful in some situations - this means you'll have to memorize when to get it and how), can't change the drone formation when an ammo-based special weapon is equipped (changing the formation should've been mapped to its own button), trial & error (attacks from all directions, boss patterns), a bit short, ammo-based special weapons make the drones larger (sometimes making it easy to confuse them with your own ship when things get hectic) and the projectiles obscure enemy shots, somewhat disappointing final boss (only one form, looks a bit silly)