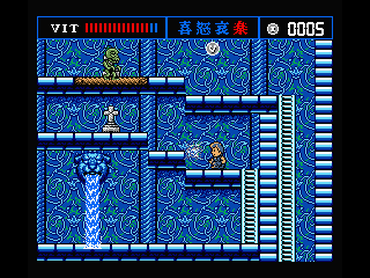 ​
+
Two playable characters with different stats and moves
Basic character building (speed and jump length can be upgraded using money you collect during the levels)
Can heal using collected money (pretty cheap)
Choose your own path (small hub area with four levels holding keys that unlock a boss's chamber, then four more?)
Pretty nice cutscenes (artwork stills and text)
Some good bosses, pretty good jump control (some control when falling as well), each character has four different moves (but can only perform one at a time by collecting the correct power up), walk in mid-air as Cles using the fourth/rightmost power up (keep holding the d-pad), minor puzzles (block pushing and stacking to reach higher, timed doors opened with switches), short warning sfx when low on health which doesn't repeat, can stomp small enemies but you'll get no money from them if you do, some creative level design/mechanics (bounce pads - similar to Sonic springs, roll move as Cles - can jump during it, double jump (only when using Wit's leftmost/fourth move), block pushing and stacking - boulder dash, double jump - level 3 jump only?), password save (one per area), decent variation,

+/-
Can't switch between the characters on the fly
Can't replay beaten levels
No weapon/move inventory
No healing after beating a boss
Can't see boss HP
If one character dies he is captured by the boss and must be rescued by the other one, no level timers, easy to farm for money in some rooms though it still takes a while up until the fifth area where you can find a room with a respawning $100 coin, you can only enter boss rooms while using a specific power up, can only you can only push blocks when using 3 out of the 4 moves (though one is faster than the others), constantly respawning enemies in some rooms (they're easy though) and all enemies tend to respawn when exiting and returning to the room they were in, no reward from the main boss of an area, jumping is a little bit slower than walking, can continue but only if you insert Gradius 2 in the second slot on your MSX, you're given too much money towards the end and nothing to spend it on besides healing

-
Some control issues (up to jump and climb, fall all the way down to the ground if you get hit while on a ladder, huge knockback from taking a hit, Wit always crouches when shooting, can't jump onto nor off of ladders - except for some cases where you can jump onto one, kinda slow block pushing (gets tedious in parts of the fifth area though the puzzles are a bit more advanced there as well), can't jump during an attack move animation (can jump while rolling as Cles though), some delay before you can steer backwards during a longer jump and shorter jumps are triangular in shape, can't cancel out of the roll move as Cles)
Some backtracking for the right move for a specific level and after missing tricky jumps (which there are quite a few of)
Some trial & error (using the right move against the main bosses, floor traps (can at least avoid them if you're moving and keep holding the d-pad when they trigger if your speed is good enough), moving platforms can crush you horizontally, you'll face two bosses in a row without any opportunity to heal after beating the fourth level), no knockback on enemies with more than 1 HP, can't upgrade character stats freely (can't upgrade jumping beyond level 3 nor speed beyond level 5 despite the game showing you a value for upgrading to the next level)
Repeats some bosses and enemies several times
Sometimes uneven difficulty (the hippo is very easy as Wit and the green monster creating blocks is easy as Cles, easy third main boss and final boss)
Can't move back a few screens to make pushable blocks reset (need to re-enter the level), your chosen move changes automatically when traveling between areas, the last green monster boss can get pretty tedious (due to its random spawning and high HP), incomplete english ending (doesn't show the note on professor Atley's research after the last cutscene (I'm not sure who reads the note) explaining a bit more about what happens - the ending is still pretty stupid though since the intro says "some good thing will happen" when you get the jewel (the statue turns out to be holding a nuclear bomb developed by an ancient civilization that goes off when the protagonists restore and insert the jewel into it (probably killing them))),