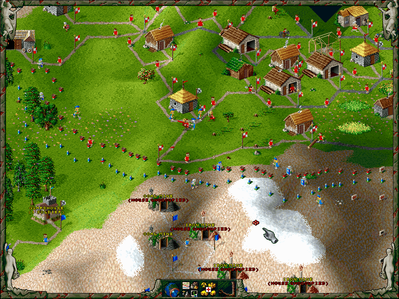 
​
+
Better animation and interface (smoother and faster scrolling, icon explanations, movable windows, more hotkeys (display the names and status of production buildings, terrain types), etc.)
Observation window (view a small window of a chosen area while playing)
Units don't die from anything other than combat and not having an hq/storehouse/harbor somewhat nearby
Zoom in and out (Z)
Music track shuffler, ambient sfx
Skirmish mode (can be used as training as well), save anywhere (ten slots, not namable but they automatically contain map and time info), info messages/letters (unintrusive, can be deleted), story campaign (shipwrecked romans - a diary updates as you play and new objectives can be added during a mission, global?), decent cutscenes (kinda low res though), auto-save option, control worker priorities using various sliders (for example which buildings should get food first),
4 factions?

+/-
Semi-automated unit behavior (similar to Lemmings, no direct combat control)
Only two speed settings (accelerate (V - still kinda slow compared to later RTS games) or normal) - can fast forward in cheat mode though (Alt+3-6)
Soldiers always fight one on one
Catapults are a bit overpowered (kills the soldiers occupying the military building destroyed) - can demolish (thus emptying) the building right before the hit though
Can't easily expand onto mountains
Looping maps, scouts can't be attacked, need to have an HQ/storehouse/harbor nearby when demolishing a military building or the soldier wanders off and disappears (workers and donkeys can also wander off if their building is destroyed) - the range is pretty long though (however a soldier can at times move in circles for a long time or decide to go to the other side of the city after reaching a storehouse instead of to the nearest border building/wherever you set the priorities to), less cartoony art direction for leader characters and cutscenes, can't capture enemy HQs, can disconnect manned military and forester buildings from road (can be used for more advanced planning of other builings), often used roads become paved (making transport faster; can't pave where you want to), story isn't particularly true to history, can't place military buildings close to each other, so-so sense of progression in terms of tech (you have everything after the fourth scenario (which only added the shipyard and harbor to your previous tech)),

-
So-so control over expedition ships (cargo - determined by what you build in your city as a whole and set priorities, direction) and they move fairly slowly - creates a difficulty spike on mission 4 where you need to mine on an island, no restart game option
Some interface issues (a building's info doesn't always show the required tool, can't check if a mine is exhausted by selecting it (need to rely on the message system which can be confusing with many mines near each other or if you forgot to demolish as you got the message due to being busy with something else at the time)? - seems that if a mine is at 0% but with some food left then it is exhausted based on tips I got from other players, sometimes need to bring up the main menu as well as the menu you're using to see the latter's icon explanations, no map window icon explanations, can't simply click on a unit to check what they're doing at the moment), taking down a flag between two other flags also removes the road between the other flags, can't change the direction of a building's entrance, annoying limitations on what military building you can attack or where you can build at times (seems to have to do with distance and how many soldiers are in the building you want to attack from; terrain type changes depending on flags/roads/forests - can't terraform a piece of land with only small buildings allowed to make bigger ones possible over time - however you can start building something and then cancel after the builder flattens the ground)
Takes too long to get a geologist out and it's a bit annoying how he can move outside your borders and waste time putting signs there
Can't directly pick soldier distribution priority for single military buildings (only in general terms based on how close they are to the enemy border (military sub menu; can also call soldiers back to HQ and send them back out though it takes a while) - annoying because of the attack limitations (you'll sometimes have several soldiers in a building near the border but only one in the building you can attack from)
Resource signs placed by geologists disappear after a while (would've been fine if you could check the land info again manually) - can usually get around this by placing a building site without connecting to it though
Too easy for workers to get stuck if resources mix on a single path, can't upgrade or downgrade military buildings, can't make soldiers retreat, picking strong attackers doesn't always work right (weaker soldiers will often attack first and it's sometimes hard to tell from which building they'll come from as you're choosing attack so as to prevent it from happening), worker pathfinding seems to worsen as your city expands (more storehouses only seems to help a bit with this), can't salvage buildings for a percentage of the resources you built them with, can't pick the "empty from building" option on resources transported to non-HQ/storage buildings? and the resources are even lost after demolishing, can't empty military buildings of soldiers or resources without demolishing them?, no online or network MP, some trial & error (unit ranges, mines deplete not only their own tile but also neighbouring tiles), no separate toggle for ambient sfx,

Tips:
"I think the optimal setup it 3 farms, 2 windmills, 2 bakers, but this depends heavily on how many Breweries and Donkey Breeders you have. Pig farms are mostly unnecessary.
Donkey Breeders should be built(At least 1) for large maps with optimized road layouts in heavy resource areas.
"The one advantage of building pig farms is that if you have limited tools and you've already used all your rolling pins for bakers, you can build pig-farm/slaughterhouse, which uses a cleaver instead.
Could be useful if you're hard pressed for steel and don't want to have your toolmaker waste it. Also you can store 6 units of food in a mine, as opposed to 4 only from bread and fish (this is very rarely necessary though)..."
Fisheries are a very important initial food source, and remain necessary throughout the game. They should be built with one screen interval. Any sizable internal watersource should also have its own fishery.
I usually have 5 coal, 3 iron, 1 gold for an initial manufacturing economy.
For a 2 Iron Smelter, 1 Metalworks, 1 Armoury, 1 Mint industry you will need 5 coal mines, 3 iron mines, and 1 gold mine to operate in the green.
Warehouses are very important in a large economy and you should have one with about 1 and 1/2 screen intervals, or around industrial centers. They alleviate traffic and speed up construction and expansion at the front.
You should try to maintain a constant 1 spread flag layout, meaning flag - open - flag.
For temporary strip-cutters, farms and mines connecting to the main road network, and non-production structures like foresters (although they shouldn't have a road at all) and catapults, and interior military buildings, this rule can be ignored, but your main road network should have a constant 1 spread."
"Cost of training 18 soldiers to generals in 2 castles = 26 gold, Cost of training 18 soldiers to generals in 9 barracks = 45 gold"