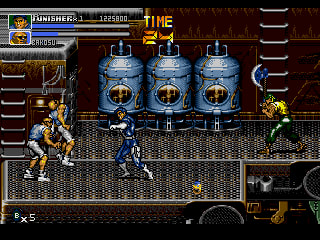 
​
​
​+
2-player co-op (optional friendly fire)
Can jump sideways/vertically
Dodge/roll move (sideways or forward, can be canceled and if you attack you'll do a strong kick when exiting the move)
Fast paced overall
Difficulty options (easy-very hard/expert - 4 levels)
Good variety of temporary weapons and some cool ones (grenades - satisfying explosion, M16, flamethrower), pretty good in-game cutscenes and cutscenes in-between levels (skippable and you can also skip individual scenes), grabs and throws, some minor combos (if you're holding an enemy while using a special attack you'll do a slam combo which hits everyone on screen pretty much, a jumping throw move - power dive, punch only attack combo - hold a direction while attacking), shows enemy names and life bars, shows crosshairs when using guns to show what you're aiming at (aiming is automatic), a few cool level gimmicks (small pillars with a timed explosion triggered when hit - Turtles in Time barrels? (however the explosion is rather small here), rolling barrels - TMNT, hostage rescue in one level - Golden Axe), pretty satisfying sfx overall (the main attack sfx is a bit weak sadly, falling dynamite in an elevator segment - Final Fight?), female hugs restore health

+/-
Usually you can use guns only very briefly when the game arbitrarily activates them for you and if you move too close to the enemies then they're sometimes withdrawn again - sometimes you can pick one up and use it normally
Basic control config
'90s grimdark/edgy vibes
Can't move while using the flamethrower or the guns
An enemy has to be killed to make it drop its weapon
Some blood, unlimited ammo for the main gun on every difficulty (there's no ammo display either, the regular guns dropped by enemies are just for points), the punch only attack combo seems faster and as strong as the regular one?, all weapons can be thrown but you have to jump to throw grenades/axes/swords, to lift an enemy above your head you generally have to knock them down first and then lift them (some are lifted over your head by default like the robots) - different on ARC?, controllable aim in the bonus level (can't move instead, short gallery shooter style levels) - manual aim in the main game might've been more fun but ideally would've used the six button pad to be able to move and aim,
jumping forward is faster than walking (you do a small dash right before it if you pressed forward before jumping), pretty tight timing when throwing grenades (have to be at the peak of your jump arc),

Compared to ARC version: Slower rate of fire for the main gun, the droid boss looks different, can't use your gun against the tank centaur boss, the female ninjas have more clothes here, very short throws on MD unless you lift an enemy above your head (done by lifting an enemy after it's knocked down, often needed to hit other enemies with a throw on MD), can't aim downwards in the main game here but I don't think there's a point to it on ARC?, the final boss fight is a bit longer here?

-
"Try the hard mode!" - no ending for normal mode
Can't throw enemies down pits/into water and can't fall into them either (can throw enemies off the level 4 train on ARC but only as a finishing move)
Can't choose between Nick Fury or Punisher in 1-player (2nd player always picks Fury)
Some control issues (the roll move is pretty slow and you can't remap it to its own button (also can't change direction) - it also sometimes won't register if you try to do it right after shooting, long delay before you can steer your jumps if you didn't press a direction at the same time as the jump button, some movement delay after landing from a jump, no jump height control, somewhat unforgiving hit detection when attacked by a baseball bat wielding enemy and sometimes very forgiving hit detection when the sword enemies at the beginning of level 2 spin towards you, sloppy hit detection when facing the guard droid bosses, keep picking up other weapons if you're standing near them while holding one),
Kinda small sprites and odd color choices at times (uses fewer colors than the system could handle as well), the music doesn't make full use of the hardware (most of the instrumentation is still pretty good)
Limited continues (only 2 on normal!), very similar player chars besides their looks, some waiting for knocked down enemies to get back on screen, some trial & error (some bosses like the tank centaur, unexplained round house kick (up->forward then attack), unexplained "lift above head" and punch only attack combo, if you kill all enemies before grabbing power ups then you tend to miss them due to the next cutscene triggering), overly quick weapon deterioration (just 3 connecting attacks for the axe for example), can't increase no. of starting lives, tiny explosions from dynamite, shuriken kinda suck, gets repetitive after a while (repeating enemies and one boss, no alternate paths) - a bit more so on hard (tougher and sometimes more enemies), kinda weird how the alternate guns have very slow bullets, final boss sounds like a regular enemy when punched, pretty easy final boss on normal, Punisher's special attack scream sounds pretty silly
​
Compared to ARC version: The screen stops scrolling when rolling forward - not a problem in the ARC game, weapons dropped by enemies disappear pretty quickly on MD whereas on ARC they don't disappear at all, much faster roll on ARC and you can change direction while rolling, some shortened cutscenes, this version is missing some interactive objects (tyres), missing the dog in level 1, there are somewhat fewer sprites on screen at once (7+ enemies on ARC), no spin move while grabbing an enemy, somewhat scratchy sampled sfx, no hammer weapon, fewer animation frames, can't destroy the cars on level 3 here, ARC game has 7 levels of difficulty, can't change point intervals for lives gained here, no punk rocker enemy, fewer color variations for enemies, no large statue and less background detail during the level 4/train boss, no lance weapon, no fire extinguisher weapon, no wooden barrels (only metal), bullets look worse, no grenadier enemy, dynamite explosions are a bit larger in the ARC version, missing destructible pillars in the final level, etc.

​
Bugs:
-One enemy could hit me from far away with his sword at one point