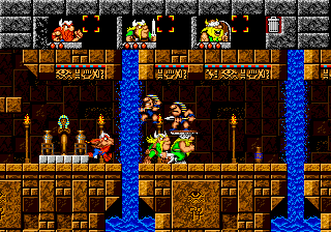 ​​
+
Innovative gameplay (switch between three characters with different abilites and separate inventories, solving various puzzles to get to the exit)
3-player co-op (compared to 2 on SNES, A+B+C to switch camera focus)
Decent animation (expressive characters, several different death animations)
Password save at the beginning of every stage (short)
​Hidden items and shortcuts
Higher resolution than on SNES (makes it easier to react to danger and get an overview of puzzles)
More stages than on SNES (41 in total)
Good puzzles overall
Fairly entertaining dialogue between the vikings (not on SNES?)
Comical (wacky, slap stick, pop culture references)
Smart bombs
In-game cutscenes showing new mechanics with some humour before each new world
Decent variation
Can headbutt enemies
Good final boss (four segments)

-
Fairly slow paced (switching at a distance is somewhat slow, waiting for platforms/bubbles in single player, simply moving all characters longer distances (when playing by yourself) gets tedious, many enemies are tedious to fight (blue-haired dudes), some annoying enemy placements)
Trial & error (block types which at one point in a stage can be bombed but require hitting a switch to remove later in the stage, teleporter of no return in candy land, most enemies can be walked through without damage, at one point you need to hold up a platform with the shield while at other times similar platforms will crush the character, fireballs shot from outside the screen, some leaps of faith - can't look down/up)
All characters need to survive to get to the next level so it's rather pointless to let the player keep going
Co-op mode is a bit cumbersome due to lack of split screen - one problem is that the red-haired viking is much more agile than the other two
Difficult parts (and/or puzzles you haven't encountered before) tend to get placed rather late in a stage making the game more frustrating since there are no checkpoints
Poor jump height control
Most jokes are cringeworthy
Worse sound quality overall than on SNES (some annoying sfx such as laser shots or lizard/dino attacks)
So-so use of colour overall
Somewhat sloppy hit detection at times
Tedious backtracking in the factory
No difficulty options
Need to beat three stages in a row before the final boss