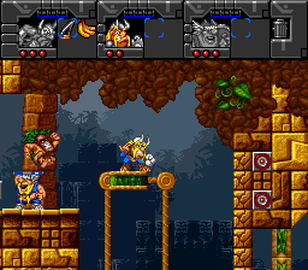 ​
​+
Some new abilities (Erik can double jump and glide jump (former can also be used to break walls above him)+break walls+swim, Olaf can shrink and fart downwards to break certain floors and jump while glide jumping, Baleog can attack diagonally and upwards at range with a bionic arm - also lets him hit switches+grab items+swing at certain points (can control the length of the arm while swinging; Bionic Commando))
Two new chars with new abilities (Fang the werewolf - can attack+jump and wall jump, Scorch the dragon - very limited flight+can glide+can shoot horizontally which lets him press certain switches) - these replace one viking for the levels where you play as them (you won't know beforehand which level they'll be available in)
Can pass through enemies without touch damage - it's their attacks that hurt
Good puzzles overall (first world is basically a tutorial; at one point you use a turret trap to trigger a target-style switch and have to follow its projectile with the camera, using torches to let the other chars see, last timed gate puzzle at last level before the boss and activating teleporters for another char by going through them with one char)
Some hidden items
2-player coop (no 3-player here though)
Skippable cutscenes
Can discard consumable items
Pretty nice art direction w/ better detail and use of color
Some decent humour (and some that falls flat) - fourth wall breaking one after the final boss
See the prequel
Can skip certain switches with good timing (Erik can build up some momentum in mid-air to be able to tackle walls even if there's not enough space to build up momentum on the ground near it)
Some interesting enemies (the tribesmen in the aztec world can temporarily transform you into a monkey)
Good final boss (6 phases here though some are pretty similar)

+/-
Password save (very short)
Limited item inventories (4 per char)
In-game graphics used for most cutscenes
Enemy drops never disappear
Baleog's bionic arm makes his sword pointless (also can't use the sword in mid-air)
Can hand over keys to other chars through key gates but not open them from the other side
Collectathon/fetch quest aspect (generally need to collect three items to finish a level besides the keys for the locked doors)
Can't stay small as Olaf while climbing a ladder
Erik can't press the target-style switches even if he can reach them
No block move - some enemies are pretty fast and aggressive+might catch you by surprise like the wizards that teleport in (there is a shield item which protects against a single hit but there's generally only one in a level)
Linear structure (can do some things in any order within some levels and some puzzles have alternate solutions)
Some pop culture references (star wars and blues brothers)
Fall damage if you fall about a screen's length or more without gliding (Erik can fall further)
Can see a bit further horizontally as well as slightly further vertically in the other versions (however these use pretty ugly pre-rendered graphics)
Basically the same story as in the prequel (time travel theme) besides the twist at the end
Can't attack downwards as Baleog and can't use the fart as an attack (if it can take out breakable walls...)
Olaf can't climb/shimmy horizontal ropes (puzzle reasons)
A bit weird how the bionic arm can't be used on breakable walls but it would break some puzzles if you could (maybe if there had to be a certain distance between Baleog and the wall so you would still need Olaf at some points)
Glide jumping as Erik is done by waiting until you fall before hitting the jump button again - takes some getting used to and makes the double jump less flexible
Can still tackle enemies as Erik though it tends to leave you vulnerable as they tend to take 2-3 hits to kill, Olaf can't push enemies back with his shield, no split-screen makes coop play a bit cumbersome in that Erik is faster and more agile than the other vikings, no bow here, no light source effect when carrying a torch in dark areas, some more straightforward levels in the aztec world, somewhat fewer open spaces in levels compared to the prequel, only one boss again, cliffhanger ending (no alternate good ending), frequently respawning enemies during parts of the final boss fight (they drop healing items and bombs), the timing puzzle at the final boss is cool but also kinda cheap without checkpoints

-
No checkpoints - short early levels but they get longer after the first two worlds (Olaf and Baleog also die immediately from falling into water and spikes are insta-death for all)
Some control/interface issues (can't look around or down/up - the view is a bit zoomed in and the game doesn't show what happened after pressing a switch if it affected something off screen (levels also tend to be built in such a way that an item found in one end can affect something in the other so either this or a basic map system would've been useful to get a good overview of the puzzles), have to select keys in the item inventory to use them, high default jump height, running into a wall or enemy knocks Erik out for about 1.5 secs+he's knocked back a bit - breaks flow and happens even if you ran into a breakable wall (the knocked out duration is a bit shorter in other versions, can also avoid knocking into walls and enemies by letting go of the buttons before touching them), Olaf moves a lot slower while small, can't control yourself in mid-air if you farted while on a ground tile rather than in mid-air, start sliding down a wall as soon as you grab it as Fang, can't press down while wall sliding to let go or slide faster, Scorch can't shoot while climbing a ladder, minor delay when switching chars though seeing the camera move to the other char can sometimes help you solve a puzzle, very short invincibility time, if you fall just a bit too far before farting as Olaf then he doesn't gain as much of a height boost and this can make you fail jumps, kind of unforgiving hit detection near platform edges - can be a problem around small moving platforms, Olaf can't fall into single tile spaces in small form)
Trial & error (some leaps of faith, enemies and turrets can shoot from slightly off screen as well as right when they appear on screen, the treasure traps, wall traps in the aztec world that get you stuck, can blow up the cannons in the pirate world but you won't know if you have bombs to waste on them or not until after where you want to blow one up, eric and olaf have the same weight when standing on the pulley system/scale lift platforms, game doesn't explain certain items like the bomb (unlike smart bombs it removes breakable walls) - I think these were in the prequel though, while shots from off screen generally don't happen you can still get attacked if you switch away from a character near an enemy and some enemies aren't immediately visible or were behind a gate you unlocked - generally you can foresee this happening though, can touch flames from above while shimmying or swinging in the pirate world, can't move olaf while someone is standing on his shield as that char will just fall off, doesn't introduce new mechanics with in-between levels cutscenes like the MD ver. of the prequel did - the first few levels have a lot of tutorial messages via switches though, olaf can walk across single tile gaps in small form, last parts of the second to last pirate world level, some one-way teleporters and ones that take you to where there is no teleporter in the aztec world, Scorch can't shimmy)
Some of the more advanced maneuvers are clunky and/or harder to pull off in single player (some optional ones aren't even possible) - maybe some sort of time freeze or slow motion feature could've been used
Can't finish a level without all three vikings surviving even if you don't need them to get to the goal and there's no resurrection item (rather frustrating if someone dies further into a level) - a level might as well restart when one dies
Some tedious aspects (parts where you need to backtrack pretty far if you fail a jump, the collectathon aspect leads to a bit more backtracking, having to get everyone to the goal to beat a level sometimes gets annoying - the NPC could've just teleported everyone to them when there's no challenge in getting there (less of an issue in coop), various puzzles feel like busy work to make the player use each char rather than challenging, the low-grav elevators in the future world, some of the jumps as Erik in the second future world level and the lack of good shortcuts there+overuse of temporary switches that lock one char into place (the second teleporter taking you to the goal isn't helpful when you find it), )
Consumable items don't carry over to the next level - annoying when you've made an effort to not waste them
A bit repetitive
10 levels fewer than the MD version of the prequel (which had 5 additional levels compared to other versions) for a total of 31 levels - a decent length still
Kind of lacks a sense of progression after the first two worlds besides the new enemies and gimmicks - some of the cheat moves could've been temporary moves picked up in the levels or unlocked via hidden items, or you could've been able to upgrade your lifebar, or the second new character could've been introduced later (or there could've been one more new char with a new ability such as cloaking, block carrying or digging)
No difficulty options
Minor slowdown and a few seconds of loading in-between worlds
Easy last pirate world level and Scorch's phase of the final boss fight. Very hard to not get hit as Erik and Olaf during the last phases of the final boss
No unique music for the final boss fight and the ending music is a variation on the title theme

​
Bugs:
-Hit detection bug in one of the aztec levels where a char can suddenly drop off of a pulley system platform when manipulating the position of the platforms
-Another hit detection bug where an activated bomb will fall off a pulley system platform if your char jumps off of it
-One of the keycards dropped during the final boss fight can despawn if you move until it's off screen (Olaf's second phase) - you'll most likely have to take some damage to get it