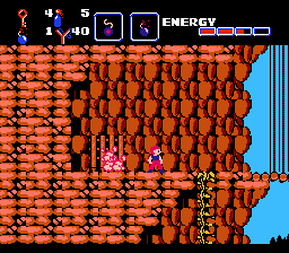 +
Metroid-inspired gameplay
Decent map system for the time (shows each individual room plus the entire map layout from the get go)
Pretty good mid-air control even when falling
Game world consists of two layers of maps connected to each other
Sub weapons (see Castlevania)
Enemies start dropping consumable items once you find them (keys, bombs), can get some hints from safes (they're often vague and there's not enough of them) and by using the transceiver, upgradeable ammo/lifebar/key capacity (Metroid), some fun weapons/gadgets (boomerang, Molotov cocktail, hyper shoes - extra speed), password save

+/-
Can't move while crouching or walk while attacking
Frequently respawning enemies (~5 seconds after death, no need to leave the room/screen)
Press select to pause and pause to cancel commands in adventure segments
Unlimited continues and you respawn close to where you died (you do lose all ammo/keys after using a continue though)
Can't attack upwards unless you're jumping and using the boomerang (would've been useful on ladders since enemies tend to hang out near where you're climbing to) - up+attack uses sub weapons
Hitting Konami Man has consequences (won't heal you any more; hitting other people doesn't?), so-so translation (with comedic results), one way warp zone near the beginning (confuses you about how they work), you lose the slingshot after using a continue

-
Found doors in the adventure segments disappear once you leave the room (so you have to re-find them if you need to take the same path again) (unlocked safes are also relocked and you need to reuse the ladder and candle in the same way)
Doesn't make sense that you can't hit walls with the hammer to produce the same effect as when you're hitting them with your fist
Trial & error (you're not supposed to return the glasses to their owner (needed to find some paths), no forewarning when crabs spawn, pits of death underwater, finding the hyper shoes - no visual hint and if your positioning when bombing the wall is slightly to either side of the middle of the right tile then it won't have any effect, pits kill although it looks like you can go down on the map, no item explanations in-game, can't directly talk to NPCs, adventure segment puzzles - need to randomly hit walls with either the fist or the hammer to make objects and paths appear (items like the transceiver are very hard to find), need to hit one of the NPCs several times to make him give you the candle)
Some control and interface issues (magic locator doesn't show up in your inventory, no jump height adjustment, can't turn around in mid-air, can't jump on to or off of ladders (somewhat slow climbing though the hyper shoes help), can't jump right after attacking, can't attack while climbing ladders; adventure segments - need to press B to scroll the tools inventory, directions when moving forward or backward are reversed on the 'backside' map (but not left or right), can't cancel a hit command, need to reselect an object to keep using it, slow text speed, no open or examine commands)
Pretty basic sprite work for 1987 (see Contra, Mega Man, Punch-Out!, Double Dragon, Maniac mansion, Phantasy Star, Castlevania II, IK+, etc.)
No maps in the adventure segments, found doors and warp zones don't show up in the map you do have (so you need to make your own notes), no difficulty or control options, so-so enemy variation and fauna distinction between areas, enemies keep dropping an item type even when your inventory is full of it (see Zelda), some annoying enemies (the bats, the boomerang thieves - can't get it back even if you kill them!), backtracking (need to pass the bridge three times), no bosses or final showdown with the Fratellis, not much of a build-up towards the final room, the glasses are redundant in terms of their function (path revealer like the hammer and the fist) and why can't you use your sub weapons in the adventure segments?,