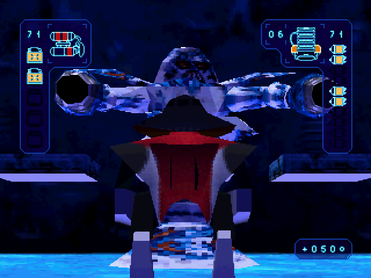 ​
+
Unusual premise (play a sentient AI refugee that after an expedition gone wrong wakes up on a hostile planet after being frozen for an unknown period of time)
Start off damaged and without basic abilites after the intro level (a short tutorial explained as a systems test) and cutscene
Partially non-linear gameplay
3D area and world maps (need to find it early on, pan and rotate, zoom, detailed topography, shows doors and items but doesn't show which doors lead to save rooms)
Strafing (no circle strafing though)
Control config, smart bomb weapon, good bosses, upgradeable health bar/defense/ammo capacity and map reveal items (Super Metroid), some neat sound design touches for the time (sounds become fainter as you move away from what's making them and vice versa), features a hidden room with a monolith from 2001: A Space Odyssey in it where the music changes to Stauss’ “Also Sprach Zarathustra”, some mini-bosses, a few teleporters (one per area except for the forest canyon floor/second one, need to have found more than one transporter room to be able to teleport), one alternate ending (can choose to spare Agen's life), skippable cutscenes and staff roll

+/-
Frequent save points
Can't lock the camera view behind the avatar (it's generally at an angle similar to a 2D beat 'em up)
Some fall damage if you fall several floors down
~10 seconds of loading between areas and even some sub areas
The world feels a bit more like a large maze platformer level than a real place compared to SM or Flashback for example
No truly hidden items? (they're all shown on the map if you reach the room they're in so the challenge comes more from navigating the 3D spaces, only in a few cases do you need to blow up a wall to get to a room with an item), only two ability upgrades that let you reach new areas besides regaining the jump early on (mines, double jump), evil clone battle near the end, can't save your friend's life?

-
Some enemies can be shot from afar without them reacting to your presence
Some control/interface issues (throwing a mine over a platform edge often makes it drop straight down, can't switch between different rooms on the area map screen (combined with the somewhat repetitive rooms it makes it fairly easy to get lost compared to SM for example), unadjustable jump height besides the double jump, awkward manual camera adjustment controls (select+d-pad) - the game makes subtle adjustments for you as you play though so you don't need to be using it all the time, camera angle rotation tends to revert back after releasing the button - you also can't properly rotate it in a few rooms meaning you'll end up behind pillars and walls, the map's camera resets every time you exit the map screen, when double jumping you reach much higher if you press the button again right after jumping, some delay when jumping from standing position which isn't there when jumping while moving)
So-so framerate overall (good in smaller rooms)
Too many tedious vertical rooms and some waiting for moving platforms (especially in parts of the ice chasms and desert area where in some rooms you can't adjust the camera to not have pillars and platforms end up in front of your avatar as you're moving around)
Pretty basic and generic in-game graphics
Some items are placed out in the open rather than being hidden or placed after a platforming or combat challenge, overly large hit box on the snake mini-boss in the ice area, some trial & error (the lava boss seemingly can't be killed with the default weapon despite it flashing and screaming when hit with it, the cooling unit is in the desert - need the run move/speeder to be able to reach them though, some cheap enemy placement in tight platforming segments, point of no return near the mini-boss of the ice area unless you found the first transporter room - if you didn't you can't use the transporter here to get out), easy desert area boss with a pointless invisible wall in its room, no subtitles in the cutscenes, the lava boss can get stuck and unable to fight back (you'll probably have to release it to get more mines unless you collected everything up to that point though as it has lots of HP)

​
Bugs:
-Hit detection issues in one of the desert area rooms makes the platforming there rather annoying
​