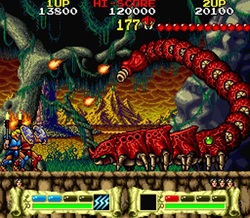 +/- Stamina bar affects your attack strength (makes some parts rather slow/button mash heavy if you don't know when to use your magic (which you can only hold one of)), faster to jump than to walk, somewhat loose scrolling (makes it hard to react to fast moving enemies like bats and facehuggers), unlimited continues via credits + instant respawn, lady enemies lose their clothes and run away when beaten, hit enemies behind you when swinging your weapon (see Castlevania), male boob plate

- Can't turn around or move while crouching (would be useful), can't attack upwards (would also be useful), no dodge/slide move (there's a shield but it's auto-controlled and a rare find later on) - some enemies are very agile or have longer reach than you, no alternate weapons or magic, short (6 stages), trial & error (fast enemies attacking from both sides or falling from above, boss/enemy patterns), you need to take it really slow in the final stage to not get hit, mostly simple bosses, annoying/repetitive grunt when attacking which also cuts out the melody in some music tracks, almost no platforming beyond the first stage