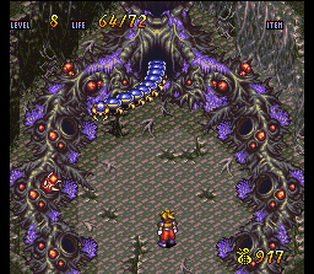 ​
+
Agile main character (Run (can change direction while doing it and no need to hold the button) and jump from the get go)
running by the press of a button instead of double tapping
faster text speed
pressing L in menu tells you how to perform attacks and equipment info
weapons have certain features attached to them (such as regeneration)
beating every enemy in each room is no longer required (however in some dungeons you need to in order to free spirits and progress), continues and develops the restoration theme from Soul Blazer (also references it in one area), two optional continents to resurrect (One of them, Mu, is near impossible to find without a guide), nice cutscenes and visual effects, partial life refill upon levelling up, memorable scenes/locations (the avalanche scene, meet the developers in-game in Neo Tokyo (FF IV), ghost scene in Neo Tokyo, zombie infested desert town), fairly large inventory, hidden items, mini-games (whack a mole, race, throwing challenge), some innovations (expand/develop towns (help important people with their problems and their towns will grow), weather decides enemy behaviour in Zue), get drunk on Sake, good shop interface, good dialogue overall with some decent humour, lab tower dungeon (get to cooperate with a few allies), some large and detailed sprites, good art direction overall, some good bosses, zelda/metroid style exploration (find new items to gain abilites and reach new areas), some good puzzles later on, decent (and short) stealth part, each new areas' name is introduced via a floating text

+/-
Respawning enemies (upon leaving and entering a room)
one or two extra levels make bosses much easier to deal with
you start off with all the physical attacks available (lessens the sense of progression a bit)
hostile creatures apparently don't count as living
inconsistencies about what objects can be interacted with (some boulders can be destroyed or pushed
some rocks or pots can't be picked up, etc.), talking hero (unfortunately he refers to himself in the third person at times but other than that he's alright), you can sequence break the growth system a bit in some areas, bosses are often immune or resistant to spells, no way to regain animal/plant communication skills later on? (some areas seem to change a bit and the penguin town is found after losing the ability), can't buy crystals to trade for magic (only about 90 pieces to be found in the game - more than enough though as magic isn't all that useful),

-
Can't choose not to break the vase at the beginning
Elle sometimes speaks of Ark in the third person when you're talking to her
some trial & error (fall trap in fifth tower, boss patterns)
can't sell equipment/items/spells
starts off slow with having you beat five dungeons (next chapter is more engaging but the game really takes off during the third chapter)
​can't jump down/up diagonal ledges, can't carry pots/rocks between areas, some NPCs say the exact same thing, tedious escort mission (Leim), most animal NPCs look pretty generic, lack of exposition and a defined antagonist (until very late in the game), some unavoidable attacks (morph boss, enemies waiting at the top of ledges when you're climbing up, some spells), some dead space and dead ends, lack of puzzles in most early dungeons, some magirocks can only be obtained at certain points in the game and will be gone if the opportunity is missed, need to talk to Meilin several times to be able to sleep at the inn in Louran and progress the game, menu system is somewhat impractical (spellbook really should've had its own menu for easy access using the start button), healing items are used instantly in-menu but leave you vulnerable for a couple of seconds when used in-game as an equipped item, obvious artificial gating at lake and great lake caverns in America, when arriving in America the town looks pretty much the same as in Europe, sk8rboi Perel (seriously cheesy part of the game), vague fetch quest near the end (Star stones - sewers (Tokyo) are described as ruins and you need to search the seemingly empty town to gain access with no clues given), no sense of urgency during Lion chase or deploying bombs on the airship, tedious final boss (final form - can't use magic, causes slowdown and it takes forever to kill unless you grind for a few levels), repeats background tiles and music for several areas, no alternate physical weapons, some cheap enemy placements next to doors
plot oddities/conveniences (pretty obvious that the Elder wanted you to find the box in the beginning (goes out when waiting for you to come, poor protection on the box itself), can't go back to tell the others in Crysta when you find people frozen in the cellar stairs, shopkeepers aren't frozen in the beginning, poor explanation from the Elder on what happened with the townspeople and why, Lion King doesn't tell you about the bridge to the east after you've helped him (translation error?), the wounded Yeti scene (when getting help back there's suddenly another Yeti at the other side of the lake), how does Kumari know that you can no longer talk to animals and plants or what you're up to?, Meilin's grandfather conveniently stands right outside the building you find her in, need to find Turbo before you can identify Meilin even though you've already found her (she's in a suit of armour and can't be interacted with), what was Royde doing at the entrance to the Scandian forest?, why would the Toll guard in Loire not care about guarding after the revolution?, Columbus tells you he's still awaiting a hero and won't tell you about the Queen's kids after you rescue him (then walks away after being tortured for who knows how long? Afterwards in town he keeps quiet), Princess Elle after being attacked on deck: I want to stay here (also where does the ship crew sleep?), why'd Fyda have to take the next ship to America?, who are 'unnecessary' according to Beruga?, Leim the lion exists on two places at once at one point (Tokyo and Savannah), Freedom's research team (where did they come from, where did they go?), how did underworld Elle beat the evil Yomi?, why couldn't Ark open the door to the overworld 'Box of Arms' earlier and who opened it instead?, the fact that Dark Gaia used primitive people around the world to help it instead of using Beruga's robots and biotech, when did the lab tower appear and how did the others find it?, what other entrance are Perel and Meihou using in lab tower and why aren't you all using it?
​some backtracking (mountains), the election part is way too clean compared to real life
​