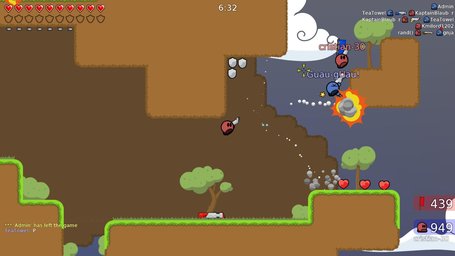 
​
​+ Soldat-like gameplay (mouse aim, team arena combat, CTF, etc.), grappling hook with good swinging mechanics (swinging lets you move around much faster, can also grab other players and pull them towards you), fun physics, very fast paced when mastered, infinite (?) hammer jumps via teammate (hold onto them with the grappling hook and have them hit you with the hammer over and over), rocket jumps and acceleration boosts via rockets and swings, pretty satisfying sfx, double jumps, armor power ups (up to 10 more HP), sound cue when hitting someone off screen, it's free!, temporary ninja transformation (some maps, can boost forward in mid-air using its attack), can manually bind chat messages or suicide to a hotkey (F1),

+/- The grappling hook also hits teammates and pulls them towards you, automatic team rebalancing if someone leaves, no mid-air acceleration when jumping (until you've learned a level or can boost you'll end up in situations where you're moving slowly in mid-air), the avatars all look like Kirby, three modes (DM, Team DM, CTF), scoring doesn't take into account if you sacrificed yourself to protect the flag or flag capturer, pretty short range on the grappling hook (can't be upgraded), no friendly fire damage, low ammo capacity for each weapon (the default gun has infinite ammo but the firing rate becomes very low after emptying its initial ammo), the gun respawning timings don't favour respawned players, overpowered ninja transformation (only appears on some levels),

- The online filters don't work properly, can't extend the hook while holding on to a surface (see Super Turrican 2) unless you're hooking on to the ground beneath your avatar and walking or jumping away from it, few weapons (hammer, gun, shotgun, rocket launcher, rail gun), no unique weapons or tools (a scouting tool to let other players see what you see might've been cool or something like a super bomb which you had to charge up), afk players aren't auto-kicked after a while (voting system), no tutorial? (mastering swinging takes quite a while), some lag issues unless playing locally or in a very low ping game, no in-game music,