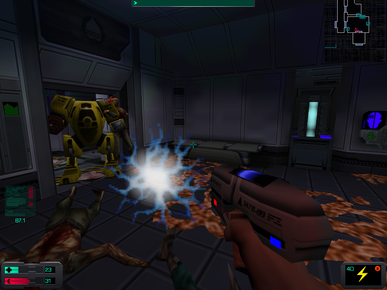 
​Bugs:
-Mines sometimes detonate prematurely and sometimes don't function properly vs fast moving enemies
-Corpses sometimes disappear suddenly
-Spiders can sometimes see an invisible player
-Loading a save where you have an active speed booster on removes the effect of that speed booster (save before using one instead of after)
-Enemies sometimes get stuck on corners or other obstacles
​
Notes:
-Played as Navy (year 1 - 1 hacking, 1 strength, year 2 - 2 standard weapons, year 3 - 2 endurance)
-Hidden rooms: https://www.ttlg.com/forums/showthread.php?t=70257
-The one hidden room (YT clip) behind breakable debris on the Rickenbacker is from a mod (secmod)
-SCP mod/fan patch (mostly bug fixes and gfx enhancements - didn't try it yet): https://www.systemshock.org/index.php?topic=7116.0
-Some weapons you find have additional bonuses which aren't mentioned (reduced recoil or being unbreakable): https://www.ttlg.com/forums/showthread.php?t=70257&p=829407&viewfull=1#post829407
-There's nothing on the platform in the cold storage room on deck 4 where someone is pushing down exploding barrels
-Decent OSA guide: https://steamcommunity.com/sharedfiles/filedetails/?id=174524157
​