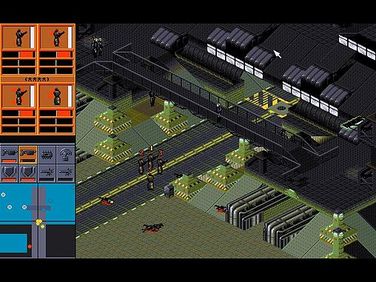 - Hit detection problems (flamethrower sometimes shoots through walls, enemy agents can sometimes shoot through a corner but not possible to hit, inconsistent hit detection when shooting from a different height than your target, sometimes your agents keep missing a target standing right in front of them), severe pathfinding issues, can't see your agents inside or behind buildings, lack of hotkeys for most actions (group select, centering the view on your group, equipment select, resetting API levels), can't select only 2 or 3 agents at a time, movement in-doors has to be done on the mini-map, can't hotkey select individual agents when in group mode (this severely limits your tactical options when in combat), cheap hits (enemy shots from off screen), trial & error (somewhat unintuitive interface (no in-game tutorial), some mechanics (NPC behaviour, auto-persuasion, time bombs, energy shields, cars controlled by the player will run over friendly agents (NPC controlled cars won't, but trains will), area of effect blast from cars and car HP (Alaska mission)), South Africa mission (need to buy info on how to get out), final mission), gets repetitive after a while (you'll have everything upgraded long before finishing every mission and there are only three different objectives, most locations also look very similar),  no historical tie-ins/real world references to whatever territory your mission takes place in, somewhat ineffective interface (need to manually reload weapons after each mission, can't put away bought equipment for later use, need to keep checking every territory for happiness levels, need to go back to main menu to save/load), clunky and limited car controls, lacks options (controls, game speed, mouse speed, resolution, difficulty), uneven difficulty (depending on equipment and the order you choose to tackle missions), can't review briefings during a mission, simple enemy AI (enemies walk into your flamethrower fire if you stand around a corner, enemy agents never set up traps or try to create choke points when engaging you, they will never retreat either), some tedious parts (prison break mission (buggy NPC AI; same with Doc rescue mission in South America), Iraqi subway system, escort missions (the NPC follows a set path and disregards danger; the Kenya mission is also unbalanced with no threat after the beginning wave of enemies, South Africa - the armoured car is sometimes bugged and explodes even though you handle the guarding agent correctly, Paraguay - Need to persuade a bunch of civilians first), your agents can't move through opened road gates (park a car in front of it) on foot, crap ending, bug during final mission locks your agents in place during combat with the last agent, annoying text font, only five music tracks total,


Comment:
Pretty awesome in its day, but it feels quite dated now due to the rough interface (the RTS mold was in its infancy here so it's understandable how some aspects were overlooked, limiting the player's tactical options), irrational enemy AI and lack of a sense of progression beyond the first few missions. It's still good for a few hours of micromanagement intensive enjoyment in a well made dystopian setting, but don't expect your jaw to drop if you've played the C&C or Warcraft series.