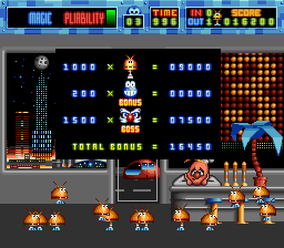 
+ Somewhat innovative control system (stretch to move between platforms and over pits, l/r to attack, inflate, absorb NPCs for points?), choose starting level from 4 different ones, smart bombs (need to inflate until you burst by mashing the button - also does some damage to yourself)

+/- 2-player=alternating, can't jump down through platforms that can be jumped up through (often annoying since you have to backtrack through vertical levels for more aliens to save), no knockback after taking a hit, can move through but not land on spikes (they kill instantly), can't destroy nor absorb some enemies, can't stretch nor jump through some platforms, respawning enemies, gameplay borrows a bit from Donkey Kong, no intro cutscene, no horizontally scrolling segments, hidden teleporters and other items (problem is you only find hidden items through trial & error),

- No invincibility time, forced collecting to progress and you need to carry one alien (?) at a time to the goal (its spaceship) leading to a lot of backtracking, bad tutorial (doesn't tell you which button absorbs, doesn't explain "magic" (time meter for invincibility), unintuitive that you need to absorb and carry something to the goal to progress), the cat (taunts you and laughs _every time_ you miss a baby), some control issues (can't look up/down, can't pick up/absorb more than one thing per duck, some delay after landing or ducking, vertically focused (see Contra) and somewhat floaty jumps, can't move sideways while ducking/flat or inflated (some enemies will stand there and keep attacking until you stand up and take the hit), can't stretch out of the duck/absorb state (annoying when moving downwards in a level by stretching), avatar auto-bounces while you're standing on an arrow block for some reason, can't use either l or r and the d-pad to control punches (and maybe punching should've been done through stretching instead to keep things simple?), can't stretch onto moving platforms), overly shiny and cluttered environments overall (except for the tutorial level), no options (difficulty, controls, etc.), the screen doesn't keep up if you fall too far, very short time limit on the briefing screen before each level, can't skip the company logos when booting the game, somewhat generic art direction overall, somewhat lacking feedback from interacting with other creatures, trial & error (enemies respawn animations are very short so you need to memorize where they were before you killed them to not get hit, can jump on some enemies to destroy them while others aren't affected (hurting you), cheap attacks here and there (shots from off screen), etc.), burp sound every time you absorb something,