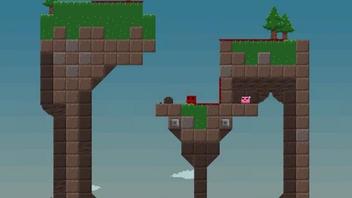 Overall Score-6.5 (due to serious bugs and lag)

*Getting the bandages/finishing dark world

+/- Very forgiving (infinite lives, saves after every level, short levels), some trap timings are sightly randomized (world 2), mid-air acceleration takes some getting used to (releasing the button almost stops you dead in mid-air),

- Fatal hit detection bugs (can't pass world 4 when it happens), huge delay in controls of main game on default mode (still not fixed by devs in several months time so you need to fix it yourself - late 2011-early 2012 on Steam), can't configure controls in-game, repetitive, no retry/exit level option after dying in warp zones, finishing a warp zone is sometimes not acknowledged by the game (same with the last level in a dark world), loading screens (especially annoying in warp zones - "WAARP ZOONE!!!"), uneven visual quality (looks like a sloppy flash game in parts, low contrast and saturation in most levels - makes some things hard to tell apart), trial & error/inconsistency (jumping off screen upwards = instant death - except in Warp Zones where this rule doesn't apply!), leaps of faith, pixel perfect jumps, various gameplay mechanics), odd wall jump physics (you're completely glued to the wall for a full second until hitting jump and the downward slide accelerates extremely fast; the length of the outward jump is fixed so you can't stick close to the wall while jumping up (sometimes this is bugged though) thus making it a slower and less intuitive process; if you stand close to a wall and face it then you can't jump away from the wall immediately - Meat Boy will grab the wall and then jump off it from some ways up), plump references to Mario and other games (Contra music?), uneven difficulty curve (especially for the collectables), the game doesn't take you to the most recent level upon starting it, sloppy hit detection (the spikes (kill from the side, very unforgiving hit detection), on the second boss (forgiving though), on some traps (cogwheels)), safe spot on fifth boss (the one with three large worms and razor edge walls you need to lure them into), unintended shortcuts (6-1, 5-16), new gameplay mechanics/elements are sometimes introduced at the end of a level so you'll have to replay easy parts over and over just to practice the new maneuver, hit detection is off on some walls (you can see Meat Boy grabbing onto thin air a few pixels away from the wall - World 2)

Some bugs:
-sometimes the game just kills you off for no apparent reason
-wall jumping hit detection