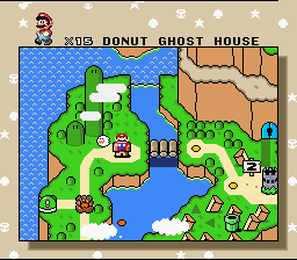 
​
+
Very good variation overall (loses a bit of it after the forest though), fast paced overall (unless you ignore the cape it's a faster game overall than Sonic 1 and definitely faster than SMB3)
Yoshi (eats, carries, spits, flies, and stomps enemies)
various innovations (spin jump (destroy blocks from above and bounce on most of the otherwise lethal enemies, run up walls using the pink corner stones, the switch palaces - find large ! blocks and stomp on them to activate special blocks in levels (these bridge gaps between platforms or fill in pits), double jump via Yoshi, twin layered gameplay (the fences), new block types, carry P-blocks and springs, minor stealth (the sleeping fish), controllable coin trail power up (a growing 'snake' of coins), the off/on switches connected to platform trails, baby Yoshi rescue and feeding, unlock alternate paths on the hub world by finding hidden exits and unlocking them with keys found in the levels, the cape - basically an improved raccoon/tanooki suit (kills undead koopas, spin to fall faster, getting hit while flying only cancels the flight - you don't take damage, better spin attack range and it blocks some projectiles, trickier to use but more powerful flight ability, no need to mash the button to fly or float - makes it much easier to spin while floating, can spin attack underwater)),
improved controls (tighter breaking and initial acceleration, more advanced item carrying mechanics (throw items upwards, drop items without kicking or throwing them)
a lot more mid-air control
scroll the camera a bit to the left or right with the l or r buttons), fleshes out the mario universe a bit further (Yoshi's home as a location on the world map, seamless world; on the other hand there are no kings in different kingdoms to rescue and no letters from the princess and the world is a bit less diverse), replay beaten levels (less need to manage your resources, even easier to rack up extra lives, pretty much necessary considering the focus on finding hidden levels to fully beat the game) and castles (press l+r in the hub world), many hidden items and rooms, new mini-games, water themed levels and levels with a hidden exit are differentiated from other levels in the hub world, look around in the hub world (press start and scroll with the d-pad - doesn't work in the very first area since it's a zoomed in separate view), some good puzzles (in ghost houses and via the hidden exits), the world changes from summer to an autumn theme (some enemies also change appearance) once you beat the special world (can't be reverted though and the enemies look a bit out of place since the levels themselves don't change), get shot out of pipes like they're cannons, ride on dolphins (Vanilla secret path), Yoshi specific bonus levels (grab the flapping wings), longer levels than in SMB3 overall (often with midway checkpoints), some optional levels, ride Lakitu clouds (pretty useless but still), save feature, some nice in-game cutscenes, faster travel by pipe in the hub world, good art direction, dinosaur enemies, exit beaten levels (start, then select)

+/-
Time limits
save points at set spots - pretty frequent (you can only access one by beating a ghost house after beating the game and looking for the last exits though - beating the game doesn't save your progress)
enemies respawn off screen (with some exceptions?)
need to release the d-pad to use the l/r camera functions and it pauses the game while moving the camera
tutorial blocks (these explain basic mechanics; not a fun or smart solution but it's better than not knowing)
​gets rid of the p-meter (isn't necessary anyway), can't play as Toad or Peach and the bros play the same, can't manually choose when to stomp Koopas while riding Yoshi (can be annoying as you don't get the shell or the cape in the case of flying ones), changes the inventory system (limited to just two items at a time including the one you're using but you can switch between them during a level, being able to replay levels makes the small size not much of an issue though it is a shame that you can't carry stars anymore - could've been used strategically like in SMB2) - overall a more flexible system that usually lets you quickly access the preferred power up for any given situation, running from flat ground into a downward slope can make Mario run in the air slightly (during which you can't jump so it takes some getting used to), somewhat forgiving hit detection overall, starts out even easier than SMB3, grabbing a power up while small now gives you the power up while making you big as well (previously you only turned big), the cape is overpowered (see above), can't spin jump from a vine or rope (used as a challenge in a special level though), most of the challenge lies in finding the exits and beating the special levels and fortresses, fairly open ended level design overall (with a few old school/straightforward levels roughly in the same proportion as in SMB3), can't shoot fireballs while riding Yoshi, all level themes feature some variation of the main theme (nice touch though it gets a bit repetitive at times), somewhat slower turning controls while riding Yoshi or carrying an item, easier to bounce off note blocks than in SMB3, missing many elements from previous games (no toad houses (there's the top secret area but it's tedious to access in some versions and less interesting), only two SMB2 enemies, no parallel world, no digging, no Kuribo's shoe or hammer brother suit, no roaming encounters in the hub world (see SMB3), no vs. battles in 2-player, etc.), fewer hidden blocks? (and no visual hints like in SMB3 NES), more similar to its direct prequel than the previous games were (except for Lost Levels), can't carry items through pipes?

-
No difficulty options or unlockable second loop
some trial & error (the cape doesn't hit undead fish, Yoshi can't hit enemies in bubbles with his tongue, can't hit bomb enemies from below using blocks, the forest and moving platform levels in special world, bullet bill cannons sometimes won't fire unless you move quite far away and back again (need to use them as platforms at one point unless you have the cape), Yoshi can walk on meat eating plants and bounce on otherwise lethal enemies without taking damage (but not on the fire trails left by the fire enemies, oddly enough), top secret area in some versions of the game (where you need to fly beneath the floor tiles and off screen), can't see if you've found all exits of a level in the hub world, green star block reward - collect thirty coins before hitting it, a few leaps of faith (in star road, for example) - still can't look up or down, boss patterns and some enemy patterns, moving platform segment in Roy's castle (somewhat random fireball movement), the ghost ship, brown blocks created through the P-block are slippery in ice themed levels),
same old damsel in distress intrigue (told via a simple text box before you get going - meh)
can't skip or speed up text
can't choose not to use Yoshi before starting a level (keeping him for later)
​Yoshi can't run up walls, slower (horizontal) swimming than in SMB1 (or SMB3 with a frog suit; you can swim faster by carrying an item but it slows down the vertical speed a bit and you don't always have one available), so-so sprite animation at times (hammer bro on platform, second koopa kid, etc.), some slowdown (in parts of the Groovy and Mondo levels for example), some tedious parts (some auto-scrolling parts, waiting for platforms or obstacles, Mondo (tidewater) level), finding all the switch palaces isn't necessary for full completion thanks to the cape and Yoshi (even though the game makes it seem like it in some places like the star road and special levels), P-blocks in ghost houses don't respawn (they did in SMB3's fortresses), can't shoot while off screen, no water themed power up (Frog Suit in SMB3), most of the key locations are pretty obvious, repeats some bosses (Roy's and Wendy's battles are just small variations on two earlier kids, the optional fortress dinos), easy and simple bosses overall, easy final stage (just take paths 2 and 7), can't use the star road to deal with the different areas in the order you want to (the star gates could've been moved around and connected to the beginning of each area and the valley of bowser changed a bit so you couldn't completely spoil it for yourself via the alternate paths), still somewhat loose downward scrolling when underwater, Yoshi will swallow even trampolines if you don't spit them out before about 12 seconds have passed, some very short levels (mostly short and easy star road levels), can't usually go back through pipe exits


Notes:
-Hit detection bug when using the cape and going down through lots of spinning yellow blocks (makes you go really fast diagonally downwards),
-Another one when you fly into some slopes (you go through them)
-Luigi's sprite got a makeover for the All-Stars version of the game 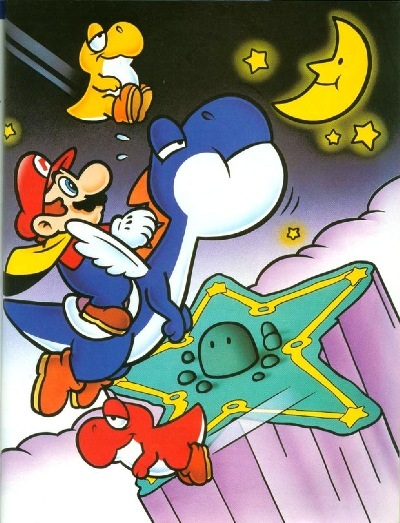