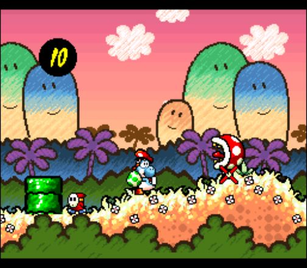 +
Diverse and memorable locations and characters
mixes platforming with shooting and minor puzzles
lots of moves (flight, stomp, egg throwing, object interaction), super baby mario, transformations (chopper, submarine, mole)
mini-games
some creative boss fights (moon boss, final boss)
excellent art direction, auto-run (no more need to hold down a button and you never played without running in the previous games anyway), re-uses some nice SMB2 elements like shy-guys and small rooms inside of pipes (pots in SMB2), much improved animation with very expressive sprites overall, new moves (bullet bills can be kept in Yoshi's mouth and spit out somewhere else to carry on flying, bounce eggs into walls and then lick (to stop) and collect them to upgrade your eggs (yellow=coin, red=star), stomp, push blocks and boulders, limited hover which takes you slightly upwards (advanced move - bouncing on an enemy makes the hover move take you higher), Yoshi can eat fireballs and use them to spit fire like a flamethrower, spit ice/water melon seeds and bubbles), some innovations (Poochy - unwieldy animal ride, !-block - opens a door to a hidden room or fills in dotted line paths (like the switch palaces in SMW) for a limited time, various mechanics around egg throwing, enemies that lock onto the player, the arrow platforms which can be moved around to reach new areas or take shortcuts), some huge sprites,  some nice polygonal effects, new mini-games (best ones are the duels in the locked huts), large item inventory is back (and now accessible in levels, several of them give you stars so you can allow yourself to get hit once or twice even later on), improved bosses (still easy overall but they're more creative and visually pleasing), excellent visual and enemy variety, longer levels (all with mid-level checkpoints (sometimes more than one) that restore some stars), somewhat comical (level names, slapstick, quirky, whacky), nearly instant restart after dying, auto-saves progress, unlockable bonus levels (trial & error heavy, breaks the continuity of the main game a bit if you unlock them before finishing it), decent ambient noise (bubbling lava for example), fleshes out the Mario universe a bit more (by telling the backstory of the brothers and showing Kamek's role among the Koopas), nice boss intros, more interesting skiing sections than in Sonic 3, unlockable vs. mode (find the top secret room and input a code; uses the mini-games from the locked huts),

+/-
No overall time limit (works well with the exploration focus though there are still situational limits (on the transformations and when you lose baby Mario))
very easy to rack up extra lives (to the point of being annoying if you're playing to get 100 points in each level since you'll wade through a lot of rooms with just coins - these could've been used to buy items besides giving you extra lives) and the counter goes up to 999 here
narrator/mentor messages have a more kiddy tone and they still use the tutorial blocks to explain basic mechanics (while other basics are explained more elegantly via the level design; some mechanics are explained again levels after you've encountered and learned them already)
more stuff to collect just for its own sake (such as the red coins, finding it is engaging overall though)
Yoshi can't carry stuff in his mouth through pipes/doors/screen transitions (annoying if you used a melon item right before one)
the stomp move hits enemies even before Yoshi begins to move downwards (le casual), enemies don't respawn off screen (instead there are spawning points in the shape of pipes - can be a little time consuming at times), minimalistic interface (in-game screen only shows stars and that's just when you lose baby mario; otherwise the stats are kept in the pause menu), limited ammo (only 6 eggs can follow Yoshi around, or 5 if you're carrying a key), regenerating health (but only up to 10 out of 30), can't use items at bosses (so don't get hit - it can be frustrating when there's no source for new eggs that can be turned into stars during the fight), giant eggs also hit airborne enemies when thrown into the ground (turning all enemies on screen into stars), point stars disappear after a few seconds, unlimited access to items and 1-ups via mini-games after 100%-ing the first two worlds, getting hit while trying to throw and egg cancels the throw, would've been nice to be able to manually cycle through your egg stock (to quickly pick a red egg without wasting a bunch of green ones for example), fairly easy to accidentally stomp right after taking a hit thanks to the knockback and the move being mapped to the same button as swallowing and canceling an egg throw (rarely a problem though), pretty random difficulty in the balloon stomp mini-game (sometimes you or the enemy get the item in one of the first balloons. sometimes one of the last), odd Lakitu cloud physics when riding them (they go right through solid walls/ground), slower movement in slopes (up or down doesn't matter), it's possible to hit things that are off screen

-
A bit short compared to SMW/SMB3
baby Mario’s scream gets annoying fast
the all or nothing approach to getting a full score gets frustrating at times (thanks to points of no return and one shot moments like in auto-scrolling levels)
can't press down or any other button to default to downward targeting while throwing an egg like you can in the opposite direction (can be a problem when you want to quickly shoot downwards as the crosshair position defaults to diagonally downwards)
some backtracking for eggs
​lose all obtained lives upon reloading your save, some trial & error (can't freeze some enemies (bandits, fire balls), finding the fourth flower in the chomp rock zone stage (need to touch a certain part of the stage with the rock to make a ?-cloud appear), the balloon ride in 4-3 (also happens to be one of the few levels with two different exits though), the last item you pair up in the memory mini-game turns into a 10-up, some inconsistency about what can be hit with eggs (shy-guys during the ghost flower boss, monkeys forming a vine, flashing fly-guys don't reward you with red coins unlike the flashing eggs (not explained by the game), sometimes regular coins also have a red tint to them (can be helped by using the looking glass item but it feels gimmicky), shy-guys carrying red coins that fly away (found in 2-5/3-2/3-9; they can spawn slightly off screen and you can be distracted by something else while their timer runs out and they fly away - moving between areas or dying doesn't make them come back either, a one shot !-block entrance and a thief hiding in a bush next to the goal), ?-clouds containing stars give you coins instead if you're near 30 stars (say 3 coins and 2 stars at 28 stars) - since you need to grab them quickly as they spread out and fall you can sometimes miss that last star or two and get a bunch of coins that you didn't want instead, a few leaps of faith (Poochy Ain't Stupid) - can't look down past the initial camera position (even though you can look up past it and even back down to it afterwards), a bit of dead space (empty pipe rooms (besides spawning enemies) - these can be useful when out of eggs since enemies spawn a bit quicker here but otherwise they just slow you down on the search for interesting rooms that can also be hidden inside pipes at times, minor dead ends (many poles to stomp with nothing at the bottom and you'll want to stomp them all to find red coins, regular coins that look like red coins without activating the looking glass power up, some !-blocks that only unlock a few regular coins), somewhat glitchy giant chomps in 1-2, some slow animations/cutscenes that can't be sped up or skipped (scratch mini-game), some annoying sfx (red coin, baby mario, baby mario beeping), the fireballs and one of the chain traps share sfx with the large piranha plants and the mice respectively, can't choose not to play a post level mini-game, much simpler hub world (linear path to the finish, areas are divided by chapter similarly to SMB2, no alternate paths via hidden level exits), can't slide into narrow paths or run over narrow gaps in the ground like in previous games, can't spit out enemies when in an upward slope with Yoshi's mouth close to the ground or when up against a wall, some slowdown, sometimes weird extra knockback after the animation where Yoshi shakes his head after taking a hit (can knock you off thin platforms in an instant), annoying knockback and loss of control when hit without baby mario on Yoshi's back (knocks him out for a bit), no extra reward for getting 100% of the coins in the coin grabbing duels in huts, enemies that can be swallowed but not turned into eggs - why?, some tedious parts (3-8, other parts of world 3 with vertical platforming and spearmen, waiting for the red flower to spit out stars or certain pipes to spawn enemies), no special message when you get 100% on everything (added to the GBA version),

​
Notes:
-A hit detection bug when shooting directly upwards to bounce an egg from the roof into a red flower (a star container) makes the egg just pass through it
-When too many sprites are on screen you can't shoot as many melon seeds at once (to reduce slowdown?)
-Hit detection bug when spitting a shell into a sloping ceiling (it acts like the ceiling is the ground for a bit),
-Hovering under a waterfall actually makes you go higher