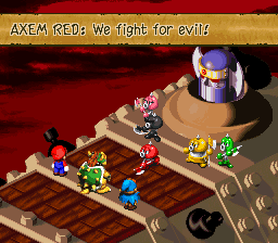 + Non-random encounters (several enemies will ambush you though and there are a few rooms with random encounters (booster's tower)), clean and easy to use interface (could’ve been even better though by showing the commands beside the button layout and showing your characters’ HP when the enemy hits them), mixes isometric platforming and puzzle solving with traditional JRPG gameplay, some good puzzles (bowser's castle's puzzle courses (except for the switch puzzle), last composing puzzle), great dialogue (self-aware, whimsy and fun, pop culture references), great dramaturgy for the time (heavily animated characters and effective cutscenes), some good characters, does a great job at broadening the Mario universe (the tone and depth is similar to the SMW era Mario comic), mini-games (racing, whack-a-mole), you can stand on other characters and bounce in beds, real-time battle elements (timed attack/defense – hit attack at the right time for more AP or DP (makes battles more interactive and fast paced and is also pretty forgiving overall), 4 save slots, cameos by various Nintendo characters, basic manual character building at level up (hp, attack or magic), technically impressive (mine cart ride, lighting effects?), some good bosses, run button, hidden items, party members gain exp even if not in the active party, some optional paths (bowser's castle) and minor side quests, one rhythm based mini-game (yoshi race), nice ending cutscene,

+/- No extra lives, save points, status effects wear off after battle, shared MP pool, 3 char party, no formations and you don't get an advantage from engaging enemies from the rear or flank, some special attacks are OP if you can learn to time them right (ultra jump, star rain), mostly linear structure,

- Hard to tell when to dodge a new enemy’s attack (doesn’t tell you when like in the GBA titles), also hard to tell what status effect your characters have been inflicted with, some slowdown, somewhat limited inventory (about 30 items slots, items of the same kind don't stack), some CGI stuff looks pretty dated (menus, copy pasted looking background tiles (due in part to inconsistent shading), some outdoors scenery looks like it's made of plastic), some uninspired character design on Square's part, Luigi isn't playable and only makes a few appearances, some tedious platforming segments (Mario's jump is quite fast here so it's hard to align his sprite with smaller and/or moving platforms), very linear, some mini-games/action segments have confusing or just poor control (mine cart, whack-a-mole), Mallow is pretty useless at first and then kind of OP towards the end (Peach is also a bit OP compared to not having her in your party for the team healing unless you grind for levels), some akward dialogue if you solve a problem before talking to the NPC having it, unresponsive controls for the music mini-game (when deciding on notes) and only the last melody resembles a puzzle (would've been more interesting if it tested ear for music or sense of rhythm), some interface problems (no descriptions during battle, can't use the last item you picked up if your inventory is full,  can't immediately equip a piece of gear that you've bought in the shop menu and can't see a piece of gear's stat effects in the shop menu), so-so hit detection during the booster chase scene, annoying how characters let enemies get away with things in cutscenes as a story device, stupid "princess gear" mini-game moment (booster wears the crown so why does he act like it's missing?), mostly uninteractive town environments, some money grinding, can't manually ask NPCs about anything (dialogue trees), some slow battle animations, some trial & error (bosses shutting off abilites or challening a single char to a duel), enemies and bosses sometimes get to move two times in a row, tedious mushroom/juggling mini-game, difficulty spike at the switch puzzle in bowser's castle, tedious control change in one of the action course rooms towards the end (no mid-air control, annoying "near the platform edge" animation that stops movement for a sec), missable final weapons in bowser's castle (since you only go through 4 of 6 paths - should've been designed so that you get all of them either way), overly drawn out final dungeon, no quest log/journal feature, kind of ugly last form for the final boss,

Bugs:
-Item sequence in moleville (gave carbo cookie to mole in bucket, then got sucked into the bucket and when returning to moleville the sequence reset so I never got the next item and lost 440 coins),