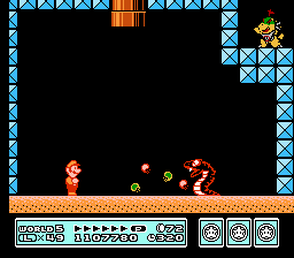 + Yoshi! (world 4 only, a few minor graphical glitches, disappears if he's too far off screen and doesn't carry over to the next level), choose between mario/luigi/toad (no princess though sadly), some new mechanics (quicksand switch (works like in Sonic & Knuckles), save feature (save & quit lets you exit beaten levels and switch characters though it also makes you small), teleport back to previous worlds via a star road room, mid level checkpoints - also make you big if you're small), completely new levels, mostly new music, new hub world guards/encounters (fishes, ), three collectable coins in every level (100% unlocks a hard bonus world which can only be partially accessed via alternate exits otherwise (needed to get keys to progress in said world)), alternate paths through the hub world, some very good bosses (Wart, big ghost mini-boss, plant mini-boss), interprets pretty much the entire SMB series via the SMB3 engine, features the hovering/carrot suit and the penguin suit, optional post game challenges (comet levels - collect coins, beat levels while small, etc.)

+/- Pretty simplistic early on since it emulates SMB1-2 there (straightforward levels with mostly one screen's height, SMB1 style mini-bosses) - later worlds are much more loosely based on the rest of the series, can't choose to start from the beginning of a levle after touching a checkpoint mushroom and dying, features SMW-style ghost houses (well designed overall but can slow down the pacing), hub world encounters can move into you right after having beaten a level (didn't happen in SMB3?), easier memory/match two game, can't jump over the flag poles, invincibility from stars runs out very quickly, no auto scrolling in the airship levels, can't run underwater, no need to mash the button to fly or glide in the air (raccoon and carrot suits) - makes it a lot easier to do, koopas die in one hit from jumping on them with Yoshi (without the respawning this can screw up some puzzles), world 7/SMG world might've been more interesting if the reverse gravity was manually controllable like in Metal Storm/Kid Chameleon/VVVVVV, beating the game before beating every level means you’ll sometimes have to do a comet challenge before playing the regular version of an unbeaten level

- Extra lives aren't saved (items are so why not?), severe slowdown here and there, starts out too easy (especially the SMB1 style mini-bosses) except for some of the star coin locations, can't move back and forth to make enemies respawn (for block puzzles), some red herrings (the two pipe entries near the beginning lead to the same route, breakable blocks that can't be reached here and there), some delay after beating bosses while a jingle plays, some points of no return, going up a screen in for example 1-7 means you can't jump down again (the lower edge of the screen turns into a lethal pit), some trial & error (landing on an upside down koopa while upside down hurts you, one or two leaps of faith (world 7 giant level for example), route through world 6's final level (need to go back through the pipe), can't spawn a 1-up and a power up at the same time (the first item disappears if more than one is spawned), the scrolling and momentum stops abruptly when you move into the first world's main boss encounter (the game makes you fall straight down as if you hit a wall - you also need to move right up to Bowser to make him start moving, some parts with an invisible block and enemies near the same spot), labyrinths and ghost houses), some distracting (garish and cluttered) backgrounds, limited throwing controls (a bit annoying when trying to bomb walls), SMB2-style levels are missing some of its more interesting enemies like the carpet riders, very slow power up progression (only the mushroom, flower and star are available for the first two worlds), some backtracking and dead space if you go for the star coins, some cases of sprites blending in with the background too much, somewhat sloppy hit detection on the cyclops enemy (unforgiving), minor hit detection bug at the beginning of the sunken ship level and in 5-1 (coin block turns invisible and makes Mario jump constantly if you stand on it), easy world 3 main boss and world 4 mini-boss (the latter takes too long before the floor starts falling), some mildly annoying music (worlds 3 and 4), hit detection problems in the squeese trap room in world 4's first fort (crouching at one point makes you teleport to an open area if you get squeezed instead of dying), loose upward scrolling in underwater areas and a few other segments (last world 6 level for example), easy dino encounters, lion mini-boss is too easy because the invincibility time lasts the entire jump from one side to the other so there's no danger in touching it then, the screen stops scrolling upwards at one point in 6-1 (after the waterfall with two 1-ups next to it), some sidetracking just for standard coins, can't use the raccoon tail underwater, non-functioning screw platforms in world 6's final level, can't break giant blocks with the tail, unfinished levels can be passed by at two points on the hub world (world 7, world 6), two power ups can't be reached when big (flower in world 2 and carrott in world 3 - jumping while crouching doesn't work for at least the latter (haven't tested jumping from the left for the flower)