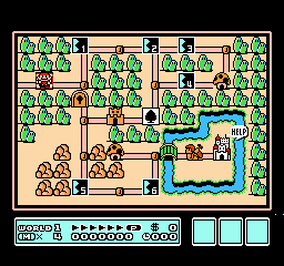 +
Great variety (mixes in water segments during land stages, many different enemies, many stages have unique elements to them (enemies or gimmicks only appearing once or twice throughout the game))
large assortment of power ups that are all fun to use (Kuribo’s shoe, raccoon suit, p-wing, frog suit, hammer suit etc.)
new mini-games
secrets (hidden warp whistles and bonus levels/rooms)
alternate paths
the war machine and zeppelin/airship levels, introduced the koopa kids, huge inventory (40 items, last one gets replaced if you obtain more), the hub world (somewhat interactive, optional enemy encounters (hammer bros duels) with item rewards, alternate paths, optional levels), innovations (P power up mechanic (turn coins into blocks and vice versa for a limited time; used in some interesting puzzles), slopes which you can slide down to hurt enemies, controllable moving platforms, layered levels where you can move behind the foreground by ducking for a while on a white platform), fleshes out the Mario universe a bit (meet with inhabitants of the mushroom kingdom and get letters from the princess and from Bowser), giant world, different messages from the Kings depending on which suit you're wearing after beating the boss of a world, great art direction, stars in the background give away hidden block locations, some nice in-game cutscenes (pre- and post airship levels), blocks thrown by enemies also affect other enemies, gives some clues to secrets via the letters, vs. battles in 2-player (Mario Bros. arcade game style) where you can take each others cards (star, mushroom, flower), nice build up to the finale

+/-
Unlimited continues
time limits on levels and score counters are back
very easy to rack up extra lives
taking the warp whistle in a fortress ends the level (so you don't unlock the gates on the hub world)
can't play as Toad or Peach and the bros play the same
most of the enemies/mechanics/locations from SMB2 US didn't make a return (things that did: the ability to carry stuff (blocks/shells/bombs here), to move backwards in levels, wrap around mechanic, music changes within levels, 'empty' rooms that are just there to set a mood), starts out easier than the previous games, slower paced than SMB1/SMB2 JP but faster paced overall than SMB2 US, forgiving hit detection overall (such as when kicking a shell by landing on it and not taking a hit if you're close enough to a wall) - two exceptions are when trying to hit blocks with the tail or when trying to enter a pipe from below, enemies respawn off screen (can help with puzzles but also get annoying when you're trying to fly), can't access the inventory while in a stage (full access would've been overpowered but they had a solution for it in SMW), can't put additional suits/power ups grabbed during levels in your inventory for later use (or take off suits in the hub world and put them in the inventory), can't use the tail or stomp Koopas underwater, can't bounce on Koopa shells, can't carry shells or blocks through pipes (you lose the item), you can actually move normally in the frog suit as long as you're carrying a block or shell, can't slide or hit bosses with the hammer brother suit (can kill pretty much all other enemies though as well as block some projectiles), the cloud lets you skip almost any level entirely (filthy casuals only)

-
Mostly short levels (some are ridiculously short)
poor mini-bosses
some slowdown and flicker
no difficulty options (and no unlockable second loop)
no save feature (it’s a pretty long game)
​some tedious parts (some of the autoscrolling sections (almost three in a row in world 8), being unable to gain enough momentum to fly, 7-5) can't replay beaten levels (means no second try at some of the secrets), some items and suits are very situational (frog suit, anchor, music box), some tedious ice world levels, somewhat floaty controls (Mario takes quite a few steps after releasing the d-pad and breaks a bit slower than in SMB2, acceleration is somewhat slow), some trial & error (you still get hit while in the background of a level (via a white platform), can't destroy blocks using bombs (see SMB2), hard to tell if you can hurt Koopa kid bosses with the fire shots until you've killed one with them, can't shoot from off screen, P power ups also turn the plant traps into coins, some leaps of faith (2-3, 3-7, 4-1, 6-3 etc - can't look down), the small round cactuses in the desert world are part of the background (it looks like they're up front), can't hit skeleton Koopas with the raccoon tail or bosses with the hammers, cheap hit from flying above the screen in the spike room in the second fortress, can't hit giant blocks with the tail, the fish in 6-6, the invincible (?) fire spitting pink plant in world 7, world 7's fortress and second 'plant encounter' level, 8-1 mid section and world 8 fortress exit, boss patterns, some of the airship and war machine levels, many secrets lack hints), minor bug where if you start flying before the mini-boss the fight won't start until you land (there's an invisible wall in front of the boss), sometimes no visual hints for P power ups (usually they're placed in a way that gives it away though), pointless (but only one screen's length) platform levels when traveling by pipe in the hub world, somewhat loose downward scrolling when underwater (breaks flow), some difficulty spikes (3-8 - especially if you're trying to get the white mushroom house, some stages in world 5's second half), the tanooki and leaf power ups' functions are too similar (only difference is the ability to turn into a statue with the suit which isn't even that useful), can't skip or speed up text or cutscenes


All-Stars version (SNES, 1993):
+ Save feature means you can retry stages by reloading the save, different kinds of hammer bros have different sprites on the hub world screen, the world 8 backgrounds look a lot better

+/- The white scenery outlines at the end of levels are filled in and colored, a fire flower was added to the early hammer bro encounters, the Kings are transformed into enemy cameos from SMB2 and other games instead of random animals, harder to spot the micro goombas hiding inside blocks, some of the white mushroom house challenges are easier (more coins added to the level or less coins required), slightly different 4-4 layout (one more use for the frog suit), first mushroom house in world 6 gives you a hammer suit (combined with the save feature this makes them easy to rack up), minor layout changes to deal with hit detection bugs, the bros still play the same

- No more bright stars that give away hidden block locations, the eighth fortress no longer has a different colored side (makes it a bit more confusing), doesn't feature the sprites unique to the staff roll from the original, moving normally in the frog suit could've been activated via the l or r button

Bugs:
-kicking a carried shell into a question mark block while standing too close to it will make it not register as a proper hit (the block doesn't react)
-hit detection bug on Bowser makes him very easy (you can just stand still and crouch in the middle!)