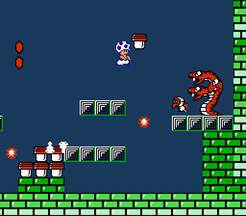 
+
​4 different playable characters that you can switch between in-between levels or after losing a life (Mario, Luigi, Toad, Princess; these have different controls so you can pick the one you like best for each stage and they're all useful in some way)
better variation than in the prequel (except for the soundtrack, mixes in vertical platforming)
allows for some freedom to choose when to use a star or heart (allows you to kill bosses with the stars; usually requires learning the levels though)
use enemies or objects as movable platforms for shortcuts or minor puzzles
you can go backwards in levels (even through doors)
mini-bosses, better bosses than in the prequel overall, warping (skip levels) and alternate paths (sometimes hidden), great power up system (pick up and throw mushrooms, POW blocks, bombs, koopa shells or plants, clocks (stop movement), upgrade your health to up to four HP), interesting game mechanics (wrap around-scrolling, charged jump, stand on enemies, digging sections, the key rooms in pots, ride magic carpets (and enemies or moving objects), blow up walls with bombs, throw enemies and items, kill several enemies in a row to gain HP), innovations (the parallel world, the key guardians (masks)), secret rooms (parallel world and inside pots), special boss levels (sometimes exploration based), new locations (ice levels, waterfalls and deserts), somewhat better ending (nothing to write home about though), higher quality music with drum samples, some sampled sfx, some nice transitions between scenes (the rocket), surreal and playful environments, good art direction, frequent checkpoints and you revive with full life, more cloud walking, tells its backstory in-game (just text but still), some good puzzles (Birdo egg as a platform, second mushroom in 4-2, etc.), the living door boss (unexpected awesomeness)

+/-
No score or time limit (except when in the parallel world where it's at around 7 seconds)
more open ended level design
minimalistic interface (stats besides health are moved to the pause menu)
no fire flower power up
sensitive climbing controls (increases flow but takes some getting used to) and you can't simply jump off a vine/rope/ladder
choppy vertical scrolling, throwing physics take some getting used to (either one block's length when still or more (how much depends on if you run and how far above the ground you are) when moving), no swimming, can't carry enemies or objects through doors, invincibility time from fire shots while picking up a block or egg, forgiving hit detection on Wart (don't need to hit him in the mouth), HP resets after every level, limited continues (2), same button to throw and jump (could've been changed on SNES), no Koopa enemies even though their shells are present (it's a dream world though), characters get a speed boost when carrying something (especially Toad who moves about 20% faster; there are exceptions though), enemies can be carried for as long as you like (unlike in later games), you can start accelerating in mid-air (see Meat Boy or Sonic), mushroom blocks block projectiles (except when carried for some reason - could've been used in the level design like in Monster World IV), enemies respawn off screen (has its pros and cons), items also respawn off screen (makes it possible to redo failed potion experiments and to farm coins in some parts, doesn't apply to 1-ups though), sometimes there's no coin gained from a radices in the parallel world (not sure how it works), when time is up in the parallel world the avatar is teleported back to where the door spawned (could've been interesting to have it spawn where it was instead and then use this for puzzles), would've been nice to get some sort of bonus from killing multiple enemies with one throw

-
No difficulty options
can't switch characters on the fly (sometimes you'll need a specific character to get a mushroom or find a shortcut)
super jump mechanics along with the main mechanic (standing on instead of bouncing off of enemies) and dead ends slows the pacing down - the jump could've been changed on SNES so you could charge it at any time with the l or r button (with some limitation like not being able to jump or pick stuff up)
minor slowdown
trial & error (finding the potion and then getting to the mushroom, shots from off screen, enemies tend not to die unless thrown into something and if you throw them when too close to the ground (during a jump to a higher platform for example) they stand up immediately, the snakes in the pots under mushroom blocks in world 6, some counter intuitive routes to secrets (for example in 3-1 where you fall down a pit to find a warp pot and need to hover with the princess over another pit to find a shortcut (can't see it without dying unless you're playing as her or as Luigi))
​warp pots look the same as regular pots, can't throw bombs when standing too close to a wall/solid platform or down ladders (throwing down ladders can work if they go upwards past the platform you're throwing from), a few dead ends, figuring out how to get the hearts and stars (no counter showing how close you are to making one of them appear and stars can appear in the parallel world), no coin counter either (it's only shown during the jackpot mini-game), thrown Koopa shells carry the player along with them if their avatar stands in their way), hearts can appear inside a wall and therefore be unreachable, picky hit detection when digging in the sand (lowers the pacing a little bit further), a couple of cheap hits in world 7 (one unavoidable hit early on unless you've grabbed a star, one leap of faith inside the castle), somewhat less destructible environment (blocks), sound effects sometimes cancel out the melody part in the music, some tedious parts (some of the vertical platforming, later quicksand segments),


Notes:
-grab five cherries to make a star appear
-kill eight enemies to make a heart appear (simply hitting a boss also counts)
-quick carpet glitch - if an enemy carpet is on screen, emptying a second one will allow the first one to travel much faster than normal
-some hit detection bugs that let you stand slightly inside a wall
-sometimes no coin gained from radices in the mirror world (just when there's a rocket in the main world?)