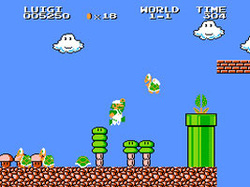 ​
+
Some new enemies (and harder old ones) and power ups (poison mushroom)
same great power up system and other mechanics from the prequel
super trampolines
winds (indicated by leaves)
the game mechanics of the prequel are fully explored
bonus levels that are actually challenging (have enemies in them), can adjust jump height when bouncing off of enemies (but only as Luigi), fake final boss, better hidden warps, cloud walking in the final stage before the castle, more interesting second loop

+/-
More random elements than before in terms of enemy patterns (bullet bills, bowser's shots and bowser himself, fish, flying koopas and hammer bros and fire traps (though you can predict these three by not stopping at all))
octopuses in mid-air and land enemies underwater
if you're using a star you can't bounce on enemies (leading to death at certain points)

-
Same music as before
still can't turn around in mid-air
still has somewhat floaty controls (slow acceleration when starting to move)
can't shoot fireballs when above the status bar at the top of the screen
trial & error (enemies on the other side of pits, fire traps appear when you're in the middle of jumps, fish bumping into you and disrupting your jumps, backwards warp zones that you can't walk away from (to world 1-1!)
​invisible blocks that disrupt your jumps, invisible currents in the water levels, take the wrong path in one of the castle levels and you meet an unavoidable enemy (there is a slight chance to avoid it by mashing jump but you have to be lucky)), same backgrounds and music as in the prequel (except the ground tiles which actually look worse), repetitive, no difficulty options (unlockable second loop/test), still can't go backwards/to the left, if you run past the cloud in bonus levels it disappears, expects you to have played and mastered the prequel (you need to know the game mechanics well for some parts), breaks consistency by having water terrain work as a pit in the land stages,