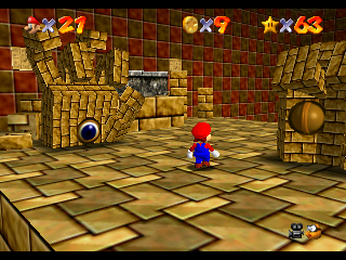 ​
+
Innovative gameplay (third person 3D platformer with controllable camera, mostly non-linear structure), new moves that are fun to use once you learn them (sliding and stomping (Yoshi’s Island – can be used to avoid fall damage here), triple jumping, running jump, backflip (two types), dive jump, wall jump – this one’s a little awkward at times though due to camera problems)
Good length
Hidden items and warps
Save feature (save after each finished level or collected star)
Good variation
Mario is more expressive than ever before
You can revisit the bosses/special enemies you’ve beaten by picking their star when re-entering the level (for example in lvl 1 you can steal the koopa’s shell and use it like a skateboard of sorts)
Can exit finished levels via the pause menu (however it’s a bit annoying how you’re teleported to the beginning of the castle hub instead of right outside the current level)
Flight (wing cap – need to hit a hidden switch to be able to get it in the levels it’s placed though and it’s harder to gain height than before)
Minor stealth element (sneak past sleeping enemies – Toejam & Earl)
Metal mario power up (walk on the sea floor, invulnerability) – not used that much though
Pretty good draw distance (occasionally lacking when going for 100 coins)
Some fun new gimmicks (the cannons, wet/dry world, snowman land ice wall puzzles, etc.)
Some hidden levels in the castle hub
Fast dialogue
Varies up the pacing a bit with more linear boss levels (should've had more levels like these though)

+/-
Mario now has 8 HP (some attacks take 2+ damage though and there’s the occasional fall damage, each collected coin restores 1 HP)
Not much point to having extra lives?
Can’t turn off mario’s voice (it’s not too bad here though)
Can now punch and kick enemies from the side
Limited breath underwater
No general level timers
Vanish cap (move through certain walls, invulnerability) is barely used
The 2D sprite objects tend to clash a bit with the 3D environment and models
Worse mid-air control
In a way the huge repertoire of moves available to the player at once replaces the various power ups from previous games (however it might’ve been better to introduce them one or two at a time to help ease the player into the game and add more of a sense of progression)

-
Too much focus on finding and collecting generic items (stars – need 70 to be able to face the final boss, coins, red coins - they do unlock levels at first but later on there's no real purpose to it)
Camera issues (the game often chooses a bad perspective and having to tweak it seriously breaks the flow of the gameplay as camera control is too stiff/clunky)
The “snowman’s lost his head” segment (the body won’t follow you until you do it exactly right)
Many tedious vertical platforming parts where if you fall you have to replay half the level (and levels can be annoyingly big and open ended)
Slopes are too damn slippery! (and you can't slow down once you start gliding even at like 10 degree angles, the game can also be inconsistent about when you’ll slide or not (compare lvl 1’s green rock’s and brick rock platform’s slopes)
When turning around mario sometimes needs too much room making you fall off ledges quite easily (using the alternate view behind his back can help but sometimes doesn’t)
Somewhat slow swimming and no interesting moves to pull off underwater (plus some underwater areas are overly big)
Frustrating snow levels (even more slippery controls, tough sliding course segments)
Neither red nor yellow coin progress is saved when exiting a level
Some trial & error (poor clues for when you need to use a cap to get the star (sunken ship, ghost house – you’ll likely get to both these stars before finding the caps), guessing the chest order in the water level, blocks that suddenly fall beneath you, cheap hits or falls caused by camera issues)
Slow ceiling climbing and movement while holding a block/npc/enemy
Simpler throw mechanic (like SMB2 instead of SMB3-4)
​Finding a star throws you out of the level you're in (often you’d have wanted to keep playing until the end/to collect other stars) - except for stars you get from collecting 100 coins and getting a red coin star in a boss level (why not in every level though?)
​Some other minor control issues (a simple thing like reading signs/talking to NPCs can be tedious because you need to stand in the exact right spot and be still (otherwise you'll punch or dive jump into them instead), jumping into a wall bounces you off of it slightly and doing a running jump into one knocks Mario out for about a sec – worsens gameplay flow, falling too far before touching ground in the snow and sand levels makes Mario get stuck for a couple of seconds – same, weird how you slide off the moving crate on the ascended ship and how Mario doesn’t follow along a moving platform when jumping)
Get thrown out of the level after dying instead of restarting and there aren’t any checkpoints (checkpoints in key places also would’ve helped make collecting the other stars in a level smoother)
Simple bosses
The way cannons are introduced is strange – you need to collect at least 1 star in the level then restart and pick the next star as a goal for the level to make cannons operational
No playable Yoshi/Luigi/Toad (until the DS version – except there you can play as Wario instead of Toad for some reason) and no Koopa kids or Kamek
Lacking a bunch of power ups seen in previous games (no fire flower, no invincibility star?, no suits, no shoe, no hammer?, no balloon (SMW), no POW block, no stop watch)
Some of the new enemies have kind of a generic design as do many of the background elements
​Crouch kick is pretty much useless
Fall damage is inconsistent? (none when shot out of cannons)
The “100 coins” stars generally get pretty tedious and time consuming to collect (the way the star spawns can also make you miss it if you didn’t plan ahead)
1-up mushrooms sometimes spawn in a way that makes them tedious or impossible to get
Slightly glitchy physics at times (jumping off a ledge at a very low speed can make the game act like there’s an invisible wall right at the edge instead, you sometimes keep a sliding motion for a bit after falling from a slope onto a flat surface)
Repeats some signs that you’ve already seen (could’ve just let you review sign messages in the pause menu)