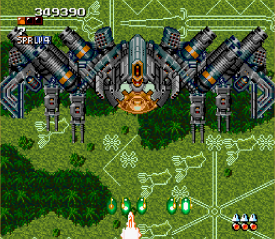 ​
+
Alternate attacks for each weapon
Some nice graphical effects
Great power up system
Varied levels
Hidden power ups (blue/red landers)
Good length (10 stages), in the occasional shorter levels (basically bonus levels) you get chased by the boss throughout most of the level

-
​Somewhat generic presentation
Very similar to the prequels
Some trial & error
Long levels with a somewhat slow pace
Hard to recover after death
Picking up the wrong weapon can be very crippling in some stages, some very short stages (3), weapons 1 and 4 are pretty bad

​
Comment:
Stupidly given the generic title "Space Megaforce" in the west, this is actually another great instalment in the Aleste series. As with the other games it's an intense top down shooter with great attention to level design and bosses. The weapons arsenal in the game is huge. Not all of them are that useful of course, but it's always fun to experiment when you've beaten the game. Speaking of huge, the levels really test your endurance as well as reflexes. If they'd stuck with the more interesting art style of other games in the series, this would've probably have been my favourite Aleste.