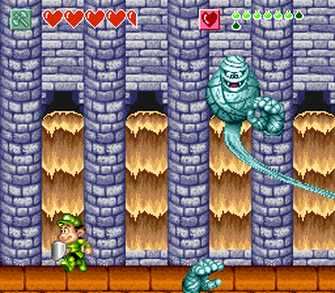 
​
​
​
​+
Zelda II/Monster World-style gameplay
Receive hints telepathically while sleeping at inns
New gear shows on your avatar (Faxanadu?) - however new gear just looks like old gear with a color swap
Basic maps for each dungeon/hostile area (doesn't show chests nor shrines nor block switches though and it's hard to tell which plane you're on)
Decent cutscenes showing major events
Feather magic lets you teleport back to the beginning of a dungeon and wing magic lets you teleport between dungeons as well as the healing spring rooms in them, can open shortcuts between dungeons (would've been nice if the volcano to southern shortcut opened earlier though to avoid some backtracking, can only open them from the left), some good bosses (mummy, eagle, final boss), some decent puzzles (altering the water levels) and bosses (squid),

+/-
HP and MP drops are pretty common above ground but the opposite is true below in the first dungeon (makes the beginning harder)
Linear first half or so
Forgiving hit detection when hitting enemies
Dropped items disappear pretty quickly
Can't block projectiles with the shield while jumping
Can't swim underwater?, only one small town (and there's only two NPCs in it; there are a couple of other locations with NPCs but they are one screen big), can't use magic while swimming (means you can't use it against the squid boss), running is mapped to the attack button, the final boss is much tougher than the rest of the game unless you got the best gear and full HP+MP (or used the temporary invincibility spell), can save anywhere (only one slot per game though and you start off at the beginning town), unlimited continues (start at the beginning of the current dungeon), unlike in Zelda 2 or MW4 the upstab doesn't make you bounce back so you have to be very careful not to get hit by the enemy you’re attacking when using it,

-
Some tedious backtracking (for the switches once you reach the pyramid and for the elemental gems)
Enemies respawn almost instantly as you move away from them
Have to remove all other gear to use the shovel
Some trial & error (floor traps leading to backtracking in the ice and volcano dungeons, some dead ends)
Harder enemies don't give better rewards and gold drops seem a bit less common than in MW
Some control/interface issues (can't move while crouching - have to switch to the shovel, can't attack while climbing a vine, can't use magic while wielding the shovel, slow text speed even when holding the button to speed it up, slow jumps, you move slower down slopes than on flat ground, weird spring physics (jump height increases and then resets even though you held down the button), can't access the dungeon map in certain rooms of a dungeon, can't exit the pause menu by pressing start), near pointless random encounters (no rewards from the enemies at first and later they quickly drop off screen), so-so feedback from hitting enemies, enemies keep dropping items which you already have a full stock of (such as MP early on), worse instrument quality for the music than in the prequel, pretty generic art direction overall, very easy first two bosses, pretty ugly and simple looking world map, rips off Monster World a bit too much, some of the music doesn't quite fit the setting, the game relying more on themed blocks spread across the world that act like locked doors (triggered on and off by hitting switches, similar to SMW) instead of the player receiving new abilities or tools to use to progress/collect upgrades is a bit dull (there are at least a few abilities and tools though), so-so build up towards the final boss, the blaze spell is too expensive to be worth using,
​