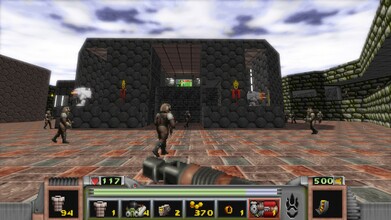 ​
+
RPG/AA elements (interconnected world, item inventory (can drop items anywhere (?) and pick them up later), shops, stat (health and accuracy) and ammo capacity upgrades, alternate paths (choose between two factions to work for at one point (affects which areas you'll play through and the ending), choose between two missions at certain points, optional area in the castle, the path to the oracle has an optional shortcut, can backtrack to one previous area for optional items), NPCs (can kill almost anyone but it can get you stuck), basic dialogue trees)
Map feature (auto-mapper, zoomable, can set markers)
Save feature (save anywhere, 6 nameable slots)
Pretty good voice acting for the time (nearly all major characters are voiced including bosses, sometimes tongue in cheeck tone such as your contact's comments when you die or quit)
Pretty satisfying sfx overall
Platforming
Can review the current mission briefing at any point (can't check the last piece of dialogue from an NPC though)
Basic stealth (sometimes not well implemented though - in the sanctuary you can't not trigger the alarm, later on you use a disguise to not alert the guards in a different area though which works well (and right after that there's a part with partrolling maulers/walker robots which is pretty good except there's a couple of enemies that can detect you and who'll set the others off if killed) and generally you can kill people with the knife or a poison bolt to not set off the alarm)
Alternate ammo for some weapons (crossbow - poison bolt, grenade launcher - incendiary grenade (creates a fairly large fire which moves around a bit)) - the mauler also has an alternate firing mode which drains some health
Fight alongside the resistance's NPC soldiers at one point (afterwards you can buy teleport beacons which let you call for reinforcements - 6 NPC soldiers)
Mouse look and strafing, fast movement, medieval meets sci-fi setting (Ultima?, FF1?), many hidden rooms, some fun weapons (flamethrower, grenade launcher, the sigil, the mauler's secondary firing mode, the ore - drop it then shoot it to make it explode), can pay one town NPC for minor early tips, decent cutscenes (artwork stills with voiced narration), temporary invisibility armor (shadow armor), some decent switch puzzles (could've been more advanced with set orders to press them in or time limited effects combined with platforming challenges, they could've also played around more with lowering and raising the water levels in some areas), some bosses with multiple forms, some teleporters that let you move back and forth between areas, many sprites on screen with little to no slowdown or lag, three different endings (one for the bad path, one for the good and another bad one if you die against the final boss), one unexpected twist in the story, some large sprites, scanner item (temporarily shows the positions of all players, enemies, items, and obstacles on the map screen) - can only be found in one area though
Veteran Edition: New secret area (see below), quest relevant points are marked for you on the map, optional bloom and crosshair (originally there was only temporary crosshair power ups), widescreen, includes the demo, optional extra gore (blood splatters onto walls), you can still continue if you did the chalice quest here (you end up at the beginning and have to escape again), option to show from which direction an attack is hitting you, can't run out of the Ore quest item (could lead to a dead end in the original), optional recoil from stronger weapons, optional melee attack upgrade/super strength (collect all three talismans), some sequence breaking possible (can skip the prison mission by killing the entrance guard at the power station and getting a pass from him, can skip some quest dialogue),

+/-
Mostly cheesy music (pretty well produced (using Roland SC-55) and catchy though)
Can't not kill the captive Beldin during the first mission - seems like an unnecessary death since he had not been interrrogated yet (also can't not kill the technician with the gold key in the power station)
Can't crouch
Can usually steal items or press switches in front of NPCs without them noticing
Some unavoidable damage (some enemy projectiles hit instantly)
Can't not kill Warden Montag to get the prison key (supposedly the ID badge should let you do this but it doesn't work?)
Automatic health item use
Some resource management (can't grind for gold - you'll still have more than enough provided you explored each area throughout the game though, limited inventory)
Can stand on torches without taking damage
No new moves gained that let you traverse new areas (see Exhumed or Super Metroid for example)
Enemies can't open doors, can't swim underwater (only wade through water which feels like walking normally), Blackbird is a pretty good character throughout the game but ends up acting more like a horny teenager's sexual fantasy in the good ending, can't rocket jump to skip some intended paths but can sort of do it horizontally with the grenade launcher (haven't tested it much)

-
Vertical aiming seems a bit glitchy with the default aim assist on (if you lock on to an enemy then there's a limit to how high you can aim so if the enemy is higher you'll miss)
Can't sell items
Some areas are too drawn out in the mid- to late game
Some trial & error (sometimes hard to tell what pressing a switch did (generally you'll find out pretty quick but some in-game cutscenes showing which door is being opened or platform moved would've been good), some cheap enemy and turret placements
the teleporter maze in the proving grounds, the sewer layout is a bit confusing even in the re-release (set markers at the elevator near the hideout and near the beginning of the alternate sewer entrance), the chalice quest early on is a red herring which leads to you getting betrayed and killed - would've been cooler if you could keep going somehow or if there was a better clue to it being a trap (if you do realize what's going on (there's a minor clue in how they talk to you) you can kill the quest giver with the knife and get access to a hidden room with some goodies instead), finding various hidden rooms (for example the hidden room in the path to the first front base later expands and leads to a piece of shadow armor), can't kill the good quest giver in the beginning without setting off the alarm - you wouldn't have been able to continue the game the way it's designed though, some one way doors and teleporters)
Can sometimes miss messages from Blackbird/your contact if you start talking to someone right when you get a "message incoming" message
Some backtracking (out of the sewers and the bishop's fortress)
So-so finale and ending for the oracle/bad path (the final area isn't a great level, Blackbird is revealed to be the leader of the aliens (or it's an impersonation by the Entity since her voice is heard in the ending if you beat it - it's not explained in either of the bad endings) and and even if you beat the entity boss mankind becomes extinct (though somehow the narrator here survived? weird); this ending doesn't quite make sense since Macil was also possessed by the order and you end up killing the oracle anyway so it's basically the same path as the good one except without "hope")
The game re-uses some enemy types a bit too much (would've made the later areas more unique if it didn't)
The order isn't very proactive about dealing with the resistance after you've taken the castle (they convert captured people into cyborg soldiers and early in the game there's an interrogation attempt which would've let them find the first base but later on they don't launch any attacks or tighten security in town which hurts the immersion a bit)
Somewhat dated graphics for the time (post Quake)
The bishop's first form kinda sucks and the final boss is easier than the previous couple of bosses, enemy civilians generally don't react to you fighting near them
Veteran Edition: Scrolling the map doesn't work (Win10) - there probably should've been an option for a semi-transparent map view as well, placed map markers tend to disappear after progressing the plot/mission further,