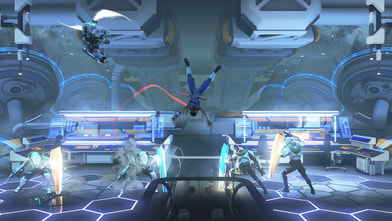 +/-
No time limits?
Can't move while ducking
Frequent checkpoints (auto-save points)
Very forgiving mid-air control
Off screen enemy respawning (happens when just a few screens away from their spawning points)
-Tons of health containers on Normal, no 2-player?, more drab environments overall than in the action games (kind of fits the theme though), pretty cheesy tone throughout, a bit odd that you can see items (green) on the map without having seen them in-game first but it does help with not missing anything, unlockables (intel etc.) don't show on the map, unclimbable (for seemingly no reason) walls in the east of the second area (City) and after the red robot boss and at the beginning of the plaza (Tower), no manual save (permanent checkpoints are actually placed at health restoring machines rather than when the message pops up (such as when finding a stat upgrade) except for before some boss fights - can be confusing), kunai switch doors can often be opened by throwing the kunai at the door itself even though the game says "access denied", Very linear structure overall (world opens up slowly until you get the panther attack), the yellow special attack (gun drones) seems worse than the other two, some enemy soldiers have shields with elemental affinities (using the wrong elements bounces you back a little), short invincibility time (can get a bit frustrating against many enemies using missiles or during part of the gorilla boss fight), point of no return when going into Meio tower, less variation in the environments (centered almost entirely on enemy base structures and cityscapes) than in the action games but on the other hand the world feels more coherent as a result,

-
Some control issues (sometimes loose camera/scrolling - can look around a bit with the right analog stick but it's not that useful during combat and the range is really short, can't control the amount of zoom which sometimes changes arbitrarily, auto-grab and climb ledges (similar to EWJ1-2 - sometimes not preferable and should've been less sensitive), can sometimes activate switches or collect health through walls where it wasn't intended)
The authoritarian public announcements are a nice touch but having them repeat over and over isn't
Several pointless dead ends early on (they're not long though)
Hiryu's sfx and voice decrease in volume while fighting some bosses
Somewhat repetitive (less enemy and hazard variation than in the action games is understandable but it's a bit much at times with the enemy respawning and repeated soldiers with minor variations, repeats the graviton boss once (almost the exact same fight), )
-A bit lame to explore detours just to unlock concept art, somewhat generic art direction at times, no control config besides keyboard/control pad, some boring backtracking (limited fast travel), some trial & error (shots from off screen, boss patterns), invisible roofs at some points (for example after the second sister boss and in the underground city area - breaks immersion and wasn't necessary), finding the stat upgrades is mostly just a matter of checking the mini-map and going to them (generally no puzzles or harder enemies that guard them - some of the tougher optional segments lead to mediocre unlockables instead so these could've switched locations), some overly easy parts (organic repurposing center), repeats some tutorial messages over and over (doesn't pause gameplay at least), one very frustrating platforming puzzle before the gorilla fight, map zoom setting resets every time you exit the map view, some safe spots vs regular enemies, only one save slot, no new game+, so-so character animation during dialogue scenes, instead of costumes (color swaps) it would've been cool to play as the fallen striders and you even need to find all of them to unlock the color customization menu, uninteractive tower entrance scene (cutscene where Strider uses the hang-glider to get there while dodging shots), so-so default jump height control (very rarely an issue), can't put notes on the map or have the game note where unlockables you've seen but haven't picked up yet are,

Notes:
-Ran into a checkpoint bug (?) once somewhere right after the third (first sister) boss and had to replay from shortly before the boss,
-Hit detection bug in Meio tower can get you stuck in a wall (in the lift portion or the first room),

​
Comment:
This game was better than expected and totally worth the 4$ I payed for it. Overall I think it's the best Strider even if not exactly amazing (well perhaps the 60 FPS with few framedrops on PC and freedom of movement are relatively awesome). To me the challenge was just right for most of the bosses, and nearly all of them are better designed than in the action games, but there's a stretch around early-mid game, up until around where you fight the second cyborg dragon that's a bit too easy overall and even dull at times (organic repurposing center). I wouldn't have minded some more enemy/hazard variety, there were several cool parts from the old games that could've been redone but weren't, and I was disappointed to find that the strider dolls just unlocked costumes. I was also surprised that you were pretty much expected to get hit a lot, but got used to it after a while. Only things that felt downright bad about combat were the parts where the chosen camera zoom level didn't make sense (using the right stick to zoom based on the chosen zoom level for a situation would've been much more useful than looking around at a terrible range) and some parts where you'd get shot from off screen.

Is it a great action adventure/metroid-like? It's never really below average to me, but the priorities were off at times. Some of the toughest platforming puzzles just lead to concept art unlockables (too many of those btw), while the super useful stat upgrades are almost always easy to find and get to. There were also a few seemingly locked paths early on that you didn't need the respective "door key" ability for, as you could get to the other side before getting it, and worse still there was nothing all that interesting on the other side. I did like that by the time I was going to enter the tower (point of no return), I had already collected almost everything of use so it's not a game you play for hours just for a big collectathon segment in the late game. Some will be turned off by the arrow pointing you in the right direction, but I think everyone can appreciate the game having useful combat abilites being used as door keys and not the other way around. Only the later elemental doors feel a bit lazy, but at least the effect when using them looks pretty cool. Finally there are a few invisible roofs and (for no visible reason) unclimbable walls here and there, which were unnecessary, and something I don't remember seeing in SM or SotN for example.

I'm going through hard mode now and I'm actually having more fun for the most part (special attacks are still kind of OP though). Some bosses act a little different (Solo, Centipede for example, and I think the very first boss was faster?) besides the stat changes, and enemies doing more damage means the tons of health containers are more justified, though I wouldn't mind if some enemies were a little faster to react as well. The sewer part was still kinda dull, but it's over with.