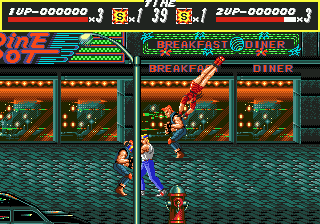 ​
+
Special police attacks (a car drives in and an officer fires his bazooka at the enemy via the roof of the car), three different characters, 2-player coop and vs., difficulty options (easy-very hard), somewhat faster combos than in the sequel, chain combos together with small pauses before finishing one of them, over the top characters, pits (to throw enemies into), alternate ending (in 2-player), grabs and throws, coop attack

+/-
Basic vs. mode (one on one fighting), no specials in the last stage, friendly fire (can’t be turned off)

-
​Repetitive, small sprites even for the time, no run or slide move, can't jump vertically/sideways (one of the bosses can), you automatically throw knives when no enemy is within stabbing range, delay after finishing a segment in a level (before the ‘’go’’ sign shows), repeats three of the bosses two times (only once as a main boss though), uneven difficulty on Hard (fire breather and the twin sisters are a lot harder than the rest besides the final boss), doesn’t show health bars or names for regular enemies (shows health bars but not names for bosses)