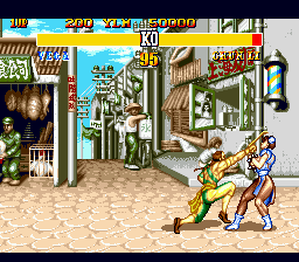 
+ Difficulty and speed options, make the opponent puke, unlimited continues, 3 mini-games (only 1 is challenging), nice intro, memorable characters and locations, great animation, less slowdown than on SNES, exclusive Group Battle mode, added speed stars to Championship mode (with a special code) and up to 10 speed stars in Turbo mode without (SNES version is about as fast if you use a code though), bloody screen portraits unlike on SNES, includes the arcade intro unlike the SNES ver.,

+/- Music is closer to the arcade ver. than the SNES ver. is, slightly better background detail in certan stages than on SNES

- Getting dizzy can get frustrating, hit detection isn’t perfect, sometimes hits don’t register because certain moves have priority, scratchy voices (can be improved but not completely fixed with a romhack), no move list in-game, most cpu fights are one-sided, minor slowdown, somewhat uneven difficulty, character selection is timed in single player, easier than SF2T: HF for SNES, doesn't really push the system in terms of colours used and some color choices could've been better