The Story of Thor: A Successor of the Light/Beyond Oasis (MD, 1994) 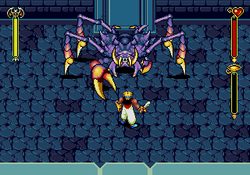 
+
Plenty of moves (you can crouch, run and jump from the get go)
Interesting use of abilities (awake elementals through finding their sources in your surroundings) - water, earth, shadow, fire)
4 save lots (1 per game though, save anywhere outside boss battles or cutscenes)
Solid sound effects (voices are pretty scratchy though)
Great art direction (except for the main NPCs' looking pretty forgettable - lack of facial detail)
Great use of colour
Mini-games (fire spirit race, 100 level endurance dungeon)
Hidden items (breakable walls here and there, infinite ammo weapons)
Some alternate weapons (bows, bombs, broadswords - limited ammo though)
Enemies can hit each other and get hit by traps
Good AI overall, switch between weapons quickly using Mode+B buttons, nice intro, health and summon upgrade items (hearts and coloured gems), some good bosses (second boss, dragon, final boss), some innovative level design (tide water, windy corridor, snake chase sequence), dying puts you at the beginning of the area or dungeon (no items lost), jump up/down stairs

+/-
Limited ammo on alternate weapons
Combos rely heavily on d-pad movement (making some moves hard to pull off and therefore not as efficient in certain situations) - why not use the XYZ buttons for this instead of menu functions?
Very linear structure early on (you can explore a bit but it's pointless until you get some summons)
No blocking (you can punch enemy bombs back at them) or strafing
No shops
Many attacks knock you over (slows combat down a bit) and invincibility time is short (makes it easy for enemies to keep hitting you if you walk into a crowd of them)
Respawning enemies (just walk a screen or two away)
Can't open closed doors in town

-
Sloppy hit detection at times (bomb explosions, fire traps)
Some tedious parts (fighting in cramped areas/on small platforms, parts of the final dungeon)
Some cheap hits (blue face boss, tower enemies en masse, windy corridor in final dungeon, falling enemies)
Loose scrolling when running (see Secret of Mana) and it gets a bit choppy when moving diagonally
Somewhat slow walking speed (you can run, but you can't keep running around while changing directions and there's a break animation which halts other actions)
The music doesn’t really suit the game (moody matiné style in a cartoony action adventure/beat 'em up?, overworld music is slow and shifts from near silent to abrasive brass blasts, boss fight music isn't too exciting and is repeated for most bosses... etc.) and the instrumentation is poor overall
Story is pretty cliché and doesn't have much of a presence
Dialogue is mostly boring (narrator's voice after important events and then you get teleported to the next area without any change in the music - a bit anticlimactic)
Somewhat lacking dramaturgy (villagers don't react to the eastern town being attacked later on, rushed scenes with no change in the music, no text message telling you that you're entering a dungeon or encountering a boss (Zelda, Monster World), villagers somehow survive in an open house when the castle town is under attack)
Lack of interesting characters and side-quests (there's the race and a gauntlet type thing but there's no story to them)
Some backtracking (sometimes you'll have to backtrack to find an elemental source, third dungeon with the waterfall, final dungeon), beeping sound when low on health which doesn't stop until you refill (at least it's not as annoying as in some other games), the different attack moves are taught (poorly) in books instead of by your teacher (elemental summon instructions are given directly by the game as you acquire them which works better), the plant ability is pretty much just a cumbersome key item (gets in the way when fighting since you can't pass through it), in some areas it looks like you can exit in spots which you can't (such as the area west of the first village), repeats enemies quite a bit, silver armlet boss is a pushover, safe spot on the boss before the plant elemental (use the crossbow) 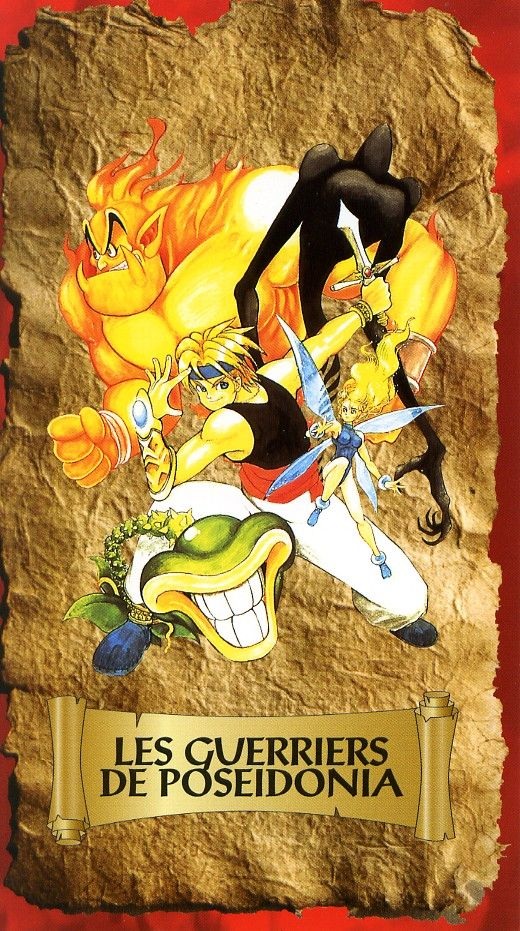