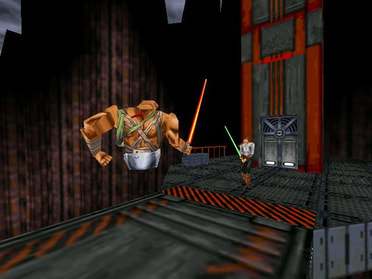 
​
​
+
Pretty fast paced (very fast movement)
TPS/FPS/Platformer hybrid (you can switch between view modes on the fly)
Melee and ranged combat
More complex level architecture (good mix of narrow passages and wide open areas with cool set pieces)
Flashlight and NV goggles for darker areas
Ttalking NPCs (you can't ask them anything though and none of the ones in level 1 have anything useful to say)
Auto run feature
Detailed control and brightness settings
Pretty detailed graphics settings
Wireframe map that fills in as you explore (2D top down view)
many secrets (hard to find from the get go but finding all secrets in a level gives you one more point to put into force powers) and smaller semi-hidden detours, move while crouching, good art direction and sound design overall (ambient sfx with a stereo effect - changes speaker if you turn your other side towards the sound source, wind fx near pits, high quality orchestral/ambient score), strafing and strafe jumping, choose the light or dark side path ~2/3 into the game (affects the ending and later force powers), difficulty options (easy-hard), can push NPCs, additional 3D map in the menu (rotatable and zoomable), jedi force powers (these take a while to unlock and are given in a set order by the game; super speed, super jump, pull - pull an enemy's weapon from their hands, throw boxes, etc.) and a basic skill tree system for them (unlock powers and points to put into them as you beat levels - can save points for later), timing and switch puzzles, enemies can open doors, some cool weapons/attacks (lightsaber - can deflect shots back at enemies and cut through some light obstacles, laser crossbow charge shot and ricochet shot, rocket launcher, mines, plasma cannon/rail gun (rail attack feels weaker than in quake though)), lets you ambush some enemies, item and weapon inventory, inventory items carry over to the next level, fight AT-STs (walkers) and get carpet bombed by tie fighters, levels feel more like actual places without sacrificng gameplay (in general - sometimes gameplay takes precedence and the level feels pretty arcade-like), some alternate paths through levels, jedi duel boss fights (kinda basic though as you mainly just need to circle around them and attack), Kyle swims like a fish, can quickly look up/down using the mouse wheel, optional aim assist, optional cutscene subtitles, optional and skippable cutscenes, some decent puzzles (final boss, mission 17 air stream tunnel), temporary invincibility and rate of fire increase power ups

+/-
Very large levels
Semi-maze like levels (the maps help a lot)
Quicksave anywhere (but no quickload)
Live action w/ cgi effects cutscenes (kinda cheesy but decent acting overall, poorly animated alien costumes and some of the new costumes like the one for the main villain look a bit silly)
Human slaves in level 1?
Resource management is pretty important (limited ammo for every gun, you'll quickly run out of ammo if you only use the rapid fire guns)
Enemy reaction radiuses are pretty short
Many nameable save slots
Basic presentation for mission briefings (just a paragraph of text below a still image)
Grenades detonate immediately after touching an object except if it hits ground in which case it (sometimes?) bounces a bit
Pretty steep difficulty curve, can play music CDs while playing (bug?), enemies leave corpses and can fall into water, can't play as the girl, pretty hard to hit the smaller flying droids, harder to hit with the crossbow unless you use the charge shot, some silly jokes (monkey-like aliens placed on exploding barrels), linear structure, limited jump height control, no crosshair in third person view, pretty small explosion from grenades and not much of a blast wave, one escape sequence (kind of confusing layout for the level but there are two different solutions as you can use force speed+force jump to get to the other side if you took the wrong path at first), no real stealth unless you count persuation/invisibility (enemies tend not to react to any noise but laser fire) but it is sometimes better to skip fighting, no interactive dialogue, CPU ally easter egg (Max from the Sam & Max series in lvl 4, can also change view to Max but oddly enough you can't control him) - supposed to help you but the AI is glitchy, killing NPCs will gradually move you towards the dark path (except for a friendly droid in lvl 4 which takes a lot of hits to kill and will trigger the dark side path if you do it) - this could've been demonstrated better by the game,

-
​Slower acceleration when moving backwards or side stepping makes auto run pretty much a must
Item boxes have to be shot to be destroyed and can sometimes be empty (contents seem randomized to a degree)
Some switches are pretty hard to spot
Some tedious segments (some parts of mission 17 where you need to time your jumps with upward air streams, the mission 9 tunnel with several gates you need to open one at a time, overly drawn out sixth mission (first AT-STs/first empire base), waiting for slow platforms or elevators)
Sometimes hard to tell what a switch does
​Sometimes odd hit detection (sometimes you'll move away from a ledge when jumping right next to the wall, somewhat glitchy physics when jumping onto some moving platforms, in mission 10 there's a point where you can get hit by a fan through a wall, some enemies will notice you through walls and start firing - others will try to fire through bulletproof glass)
Sometimes uneven visuals (ugly ground texture in the third level and non-transparent water in the dam level (when viewed from above), sometimes smudgy textures, 2D sprite elements clash a bit with the rest of the backgrounds)
No detailed control over your swings with the lightsaber
Some trial & error (can get stuck at one point in level 19/pre-temple area - otherwise this segment would've been the most interesting puzzle, some leaps of faith and some trap rooms, some cheap hits near elevators, not enough batteries for the flashlight in mission 7)
​Invisible walls/roofs in some segments if you use a force jump
The way you pick between light and dark paths feels like kind of an afterthought (there are two sphere power ups during one of the duels but no narration or comment from Kyle about what to pick or after you've picked one - just a menu screen letting you know that you picked a path after the duel), can't fly any vehicles (the game teases you with cool entrances for the vehicles several times as well as a cutscene in which Kyle escapes from an explosion in one), persuasion is very OP and protection is kind of OP as well, a bit repetitive towards the end (same infantry types and vehicles to fight, same kinds of switch puzzles for the most part),