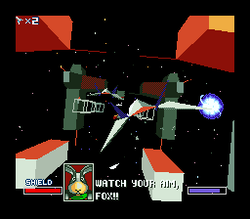 
​
+ Intense and varied action, technically impressive, teammates (which suck, but they give a sense of purpose to the fighting and add personality to the game), level design makes great use of the 3D engine, choose between three paths (with different difficulty levels), great retro anime/sci-fi atmosphere that borrows heavily from Star Wars, the controls make good use of the SNES controller

- Trial & error (especially on the harder paths, mainly because of the on-rail level design), hard to tell which way objects are moving, slow and choppy framerate/scaling, annoying voices, somewhat sloppy hit detection, the last level on the main path is significantly harder than the rest of the path, somewhat unresponsive controls due to slowdown (gets worse in harder routes),