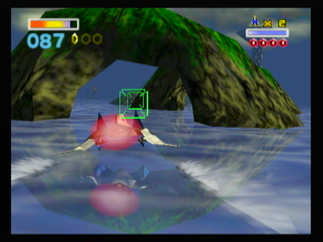 
​
​
​+
Three different routes with varying difficulty and you can switch between two of them mid-way through (the ways in which to unlock the harder ones are pretty vague though)
good variation
free range mode (arena battles)
manages to be quite cinematic without interrupting gameplay (battle arenas for boss fights, many voiced comments during gameplay, camera angles and music changes)
new vehicles (tank, sub)
some innovative level design (lava level), fast paced and intense, some nice effects (bombs), target lock on function (get bonus points through combos), funny dialogue, 4-player vs battle mode, secrets (hidden items and routes), good voice acting overall (can get annoying at times due to your buddies being almost useless in battle, Slippy is annoying in general), decent bosses overall (some are way too easy), extendable life bar (collect gold rings),

+/-
Lots of references to Star Wars and Star Trek
very caricatured characters that cater to children
your teammates are pretty crap at fighting (leaving you to take care of them since you're the squad leader)
very vague and short mission briefings overall
can’t turn off hints from your teammates
can’t lock onto boss parts (panzer dragoon), easy Independence Day-inspired level,

-
Clunky controls for charge meter moves like U-turns and somersaults (there's some cooldown time after doing
one of them – should’ve been able to at least do shorter boosts or breaks in quicker succession)
some difficulty spikes (first Star Wolf battle)
sometimes the dialogue doesn't quite make sense or the timing is off because of the scripting
need to play the first level over and over despite wanting to pick a different path
somewhat low quality instrument samples (brass and strings) and muffled speech
​mostly unskippable cutscenes, some trial & error (finding hidden routes, getting some gold rings – if you hit the enemy that drops one too late then it’s very hard to catch, the game still plays the “I can’t leave slippy hanging” scene (and he’s captured at the end of the tank level) if you pick that route even if he didn’t get knocked out by the secret weapon boss, no level select after beating the game, can’t choose to replay the previous level if you ended up on the wrong route, ​some framerate drops,