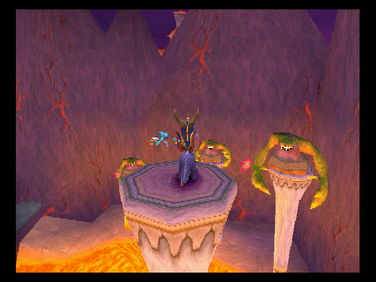 *Bonus levels and getting 100%

​
​+
Glide jumps (Magical Taluluto Kun (MD)) - can also drop quickly downwards though not use it as a stomp to attack or trigger switches
Running tackle attack - can also be used to turn more quickly
Very good animation and good visual variation
Pretty good art direction (looks a bit like a Looney Toons cartoon), partially non-linear (hub areas with several level entrances open at once)
Some alternate paths through levels
Great draw distance (achieved by gradually lowering the detail level the further away something is), super charge/faster running via boost pads (lets you jump further if used right, also provides temporary invincibility and lets you kill otherwise invincible enemies), some decent puzzles (make enemies break metal boxes with their cannons in the second area, enemies that trigger timed platforms, tree tops level and other super charge puzzles, ), flight-based bonus levels (time limited; similar to Nights and Star Fox), optional unlockable (catch thieves to collect eggs), skippable cutscenes and hints from the rescued dragons, can view your collecting stats in the options menu, can replay beaten levels, many hidden items, partially destructible environment (the tents in the second area), exit levels at any point, ​temporary attack upgrade (get kissed by certain fairies) - unfortunately it's very rare, some interesting enemies (wizards that raise platforms to avoid you and block your path), different ending if you get 100% (not really worth it though)

+/-
Frequent save points which also serve as checkpoints
Extra lives
Some forced collecting to be able to progress (free 10 dragons in the first area - doesn't take long, collect 1200 gems in total in the second - a bit tedious)
Can't jump attack enemies
No shops or permanent upgrades to unlock and only one bonus level as a reward for getting 100% completion (the level "gnasty's loot" is kind of boring but it does let you fly around freely)
Many pits, unlimited continues, some animal cruelty, unusual health bar (colored dragonfly mascot following you around), can't swim (you get a short time window where you can jump out of water without dying), sometimes the game automatically pulls gems and other items towards Spyro and sometimes it doesn't, strafe move (can't move forward or attack while using it though), can't accelerate nor decelerate during flight in the bonus levels, levels lacks side objectives, linear progression in the final area, you never grow into a big dragon (the manual implies that you will)

-
Some control issues (can't look around while moving, turning the camera is kinda slow (turning on the active camera doesn't help) and sometimes doesn't work if you're near a wall - the turning controls also seem reversed (L=clockwise turn and vice versa) and can't be changed unless you emulate, jumping is a bit slower than walking, can't walk slowly (to avoid falling near platform edges for example), ​enemies that squish you cause an animation during which you lose control, most stair climbing is a bit slow since you get stunned for a bit from charging even into short walls (which could've sped up the climbing), seemingly pointless inconsistency in which enemies you can and can't tackle, can't jump normally while running (would've been more fun if momentum played a part in the level design)
No maps (the hub areas are fairly big and have no signs either)
​Some points of no return in levels (they're short though)
The game lacks unique moves/mechanics
​Can't use enemies nor certain objects that look flat as platforms
Some trial & error (several jumps which look doable but aren't), a few too many tight jumps, pretty lame rewards for opening locked chests (25 gems or less), the game takes a while to introduce its more interesting gimmicks, some dead space, sometimes useless hints or generic comments by the rescued dragons, no course maps in the bonus levels, some thieves are very easy to catch, have to regrab the key in a hub area if you play a level between grabbing it and finding the chest, somewhat weak impact from your fire breath attack (the attack itself, not the effect on enemies and objects), it takes 20+ seconds to load a game while in-game (can't load without quitting to the main menu), only one attack type (the sequels add new elements), few and easy bosses, some generic or even somewhat ugly characters,
​