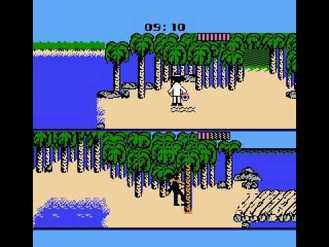 + 2-player vs., some interesting mechanics (set traps for the other player to fall into, run button, item inventory, find parts to assemble a missile and then escape with a sub that's moving around near the island), map function (shows where missile parts, the sub, and the players are),

+/- Very slow movement when low on health, the sub moves around so you need to drop the missile and cycle through the inventory to the map to see where it is before heading into the water, the missile doesn't drop where a player is killed? (unlike on C64 it spawns in another spot)

- Very tedious to get knocked out or killed since it takes 10+ seconds to come back, can't avoid your own palm tree rope traps by moving beside the tree (need to move one screen up or down instead), player 1 is only visible on player 2's screen when both players are in the same screen (disorienting), fights are too luck based vs. the cpu (whoever gets the first hit tends to win) and unbalanced if one player happens to get the K (knife - kills in ~4 hits and you can't really get away) or S (sword?) power up (kill in one hit), very cumbersome controls (switch items with the same button that you run with (you run by first holding a direction, can only cycle one way, use the map with the same button you cycle through items with - should've been mapped to select), very simple combat (button mash to win), using an item once puts it back into the inventory so you have to select it again, no tutorial, players auto-drop their missile/missile parts when the other player gets close (so you can keep making the other player drop his until the island blows up), can't change or remove the timer, can't pick up the missile parts in any order

Notes:
Compared to the C64 ver.:
+ Players can't get permanently killed, tighter scrolling, faster map display, easier to set the palm tree snare trap, better graphics, adds battle music, no quicksand? (sometimes impossible to spot without moving into it on C64)
- Players stay knocked out for longer, players auto-drop their missile/missile parts when the other player moves into the same screen (so you can keep making the other player drop his until the island blows up), somewhat worse interface in that it doesn't explain anything
Released in 1985 for C64