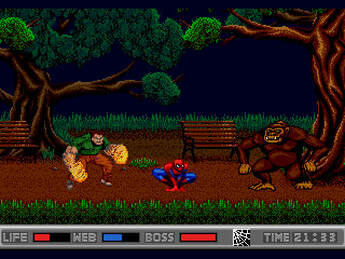 ​
​
+
Adds a hub map and lets you choose the order for two boss levels at a time (one more unlocks with each beaten level)
New bosses with corresponding levels here (vulture (both this level and boss are pretty boring though), mysterio (decent level, crappy boss), two more that I don't know the names of after defusing the boss but they also suck - the first guy's shuriken can't even hit you if you crouch next to him?)
Some control improvements (much faster crawling and automatic sticking to walls (there are a few instances where the latter can be worse tough), can swing around the edge when climbing to the top of a structure - this can also be bad though such as in doctor octopus's level and if you press straight up at the edge you'll fall down)
Fleshes out the story a little though the voice acting and script aren't that good
Some new special attacks (kicking while swinging which takes out regular bad guys in one hit and knocks them out in a satisfying way, hadouken-like web shot and back flip kick (see the manual), more continuous web beam shot)
simply moving into regular enemies won't hurt you (Shinobi), new gimmick added to Venom's level (ring the clock tower bells to finish him quickly) and some other bosses were somewhat improved (octopus and hobgoblin when you first meet them, electro/hobgoblin/venom are harder to take out with shots but pretty easy with webswinging kicks even on hard), nicer title screen, skippable cutscenes, difficulty options (easy-hard - more expensive web moves on hard and venom still attacks you mid-level), password save (short), time limit (24 hours and the in-game timer is much faster than irl - same as on MD), skippable staff roll,

+/-
Can exit any level at any point (even during boss fights and you also get your life refilled)
More levels but each one is shorter here
Resting in your apartment was removed (instead there's a bunch of life power ups scattered across the levels) - faster but it would've been cooler if you could still visit the apartment and just rest near instantly with a button press (the game also becomes easier because resting made the in-game timer go faster on MD)
New CD sountrack (pretty cheesy but well made late 80s rock/hair metal, would've been nice if they'd remastered some of the original tracks though as they were more atmospheric and serious in tone)
Adds a gallery display for collected comic book covers but you can't read nor zoom in on them so it's kinda lame
The graphical changes are a mixed bag (Dr. octopus looks much worse when moving around, somewhat better used of color and some added animation but some animation such as Spider-Man's walk cycle looks a bit sloppy and his kicks look silly, cutscenes look decent overall but pretty uneven in quality and the animation is sometimes pretty bad), can't revisit beaten levels (unless you missed the comic book in them?), even the bats go "huah!" when hit, short loading screens between each level, the villains don't move around and cause trouble if you don't do their levels (would've been a nice touch if things became worse and worse - something similar was done for Ghostbusters on SMS), the way the pinball game is sown into the story is kinda cool (except it doesn't make sense that it's also a location on the map before and after it happens), but it also means you have to play it and it's not very good - thankfully it's very short, not enough situations where the web bolo is useful, becomes linear in terms of the boss levels after beating Lizard, slower walking?, no spider sense from tougher enemies here, the vocal track is re-used several times and then again for the staff roll,

-
​No web in hobgoblin's and venom's levels?
Lizard boss wasn't really improved and the bats in his level are super annoying here (they shouldn't have been able to move through walls and the level could've been a bit more open - might've worked to have the spider sense warn you of flying enemies while swinging so that you could kick them)
Bosses take too long to kill on Normal except with the overpowered webswinging kick
The photo mechanic was removed (photographing the bosses let you make money via the newspaper Peter works for on MD which was more unique and also accurate to the lore - here web restoring items are only in the levels instead but there are more of them and they give more web each)
Some control issues (can't shoot web while crawling vertically, if you shoot right before landing the shot is canceled, kinda tricky to climb higher by swinging at the sky, can't use a web attack in mid-air unless you just swung twice so it's very hard to use efficiently)
Dying in the pinball bonus game means dying in the real game (wtf?) - this bonus game also isn't very good because it's way too zoomed in on the table, some cheap hits (the lightning bolts in electro's level are still there, the first falling weight in Mysterio's level), can't scroll to the edges of the map (not that there are any locations there but it looks bad), no forklift mini-boss?, as a platform adventure the game is a bit shallow partly because they removed currency and partly because you don't gain new moves with which to reach new parts of previous levels over the course of the game, the gorilla was made easier (can easily stun it with web here), still no boss music,


​Comment:
Spider-Man on MCD is kind of interesting in that it's not just the usual straight port with new music and maybe some minor content added; here they added a hub map, some non-linear progression and cut up all the levels into smaller ones while adding several new ones, along with some new bosses. They also add some new moves, improved the controls a bit and added a strange pinball bonus game, which is thankfully very short as it doesn't quite work. At the same time they removed a couple of the more interesting elements of the MD game, photography and resting, which made that game more unique and fleshed out its world a bit. The added cutscenes here do as well but not really in a good way for the most part, and they sometimes look comically bad. There is a nice addition to the main venom fight though where they make you climb a clock tower and ring two bells to finish him off.

Because of the omissions, and because your moves are all there from the get go and don't really serve as tools to open new areas up (you can't even revisit levels besides to collect comic book covers which do nothing if I understand it correctly, they aren't even mentioned in the manual), and because two moves are more useful than the rest against most bosses and enemies, as a platform adventure it ends up kinda shallow. Still worth playing though if you like this sort of thing and it is a more accessible take on the game overall.