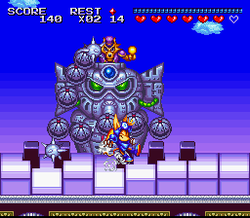 +/- You rarely bounce off of enemies when crashing into them any more making it easy to get stuck and get hit, long slide after using the rocket forces you to counter steer using L/R which makes gameplay pretty twitchy, limited number of times you can use the L/R moves (afterwards you get stunned and fall straight downwards – fair limitation in mid-air but it also happens when standing on the ground causing you to get stunned for a couple of seconds), no HP bar for bosses

- Trial & error (cheap deaths (water chase, conveyor belt trap), boss patterns, bats in the third stage, unblockable boss attack (final boss), shots from off screen in stage 6), slowdown (especially during the space shooter sequence), camera issues (very tight when jumping (see Vectorman), slow when looking down/up, puts you at the back of the screen when walking but doesn't adjust quickly enough when turning around, focuses on the wrong thing when fighting the second main boss), more of a Sonic clone than RKA, some tedious parts (robo-riding autoscrolling level - you need to memorize it and the controls are awkward, the music themed level (level 5, Sonic-style pipes - make one mistake and you get thrown back, core boss - slow), frustrating mecha fight (much worse than in RKA, complicated controls and random enemy behaviour - sometimes does nothing, sometimes goes berserk, the mechs also come from nowhere unlike in RKA), somewhat generic presentation, somewhat wimpy sound effects overall (not as satisfiying to hit regular enemies as in RKA), can't keep using the charged rocket boost to stay in mid-air, sloppy hit detection around the ‘paper press’ traps in stage 2, more labyrinthine stage design overall (clashes with Sparkster’s abilities)


Notes:
- Hit detection bugs (sometimes when trying to blast through a breakable wall while standing right next to it, the lightning trap used by the "final" boss)
- RKA=Rocket Knight Adventures (MD)