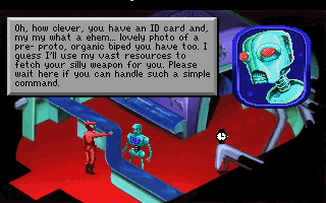 
​
+ Improved audio/visuals and interface (very similar to the King's Quest remakes by AGD), decent art direction and animation, many ways to die (sometimes over the top death and funny cutscenes), some good humour (sarcastic, mocking, puns, nerdy), good dialogue/writing overall (somewhat more advanced language than in the KQ series), some alternate solutions (killing Orat, getting money from the slot machine), a jingle plays when you do something right

+/- Can't immediately skip/close text boxes with the mouse (have to wait ~2 seconds each time or press Esc/Enter - keeps you from skipping something by accident but they could've just let you double-click instead), smell and taste icons (might get annoying, takes longer to cycle between actions), short time limit and stealth elements in the first area of the game (you can move in the direction the guards are coming from though as long as you exit the screen before they come), no health meter, save anywhere outside of a cutscene (nameable saves, 100 slots in ScummVM), pop-up interface at the top of the screen, would've been nice to be able to type out actions as an option (to try out different things and see the result), no in-game map, repetitive arcade sequence (on rails obstacle course) - skippable but they could've improved it instead, need to stay hydrated when wandering around after landing on the first planet (the game tells you when it's time to drink though and you won't run out of water (?)), respawning guards on the Sarien ship, easy and linear escape from the Sarien ship (no encounter with any evil leader or surprises near the end), making money is slow unless you figure out how to cheat the slot machine

- Trial & error (killing the star generator guard (you get the impression that you can't use the grenade properly if you try it out somewhere else and the rest of the ship gives you the impression that the two floors are separated - not that there's room to drop the grenade from the second floor to the first), only one droid is useful (NAV-201) and only one of the used ships works completely, getting the jetpack, you might not meet the scientist in the ship at the beginning (random? need the cartridge that he helps you get for later (also need a code chart that comes with the game to understand his help)), some of the droids you can buy are useless (one comes in parts and you can't assemble it -_-), need to use the hand on the bodies in the beginning to actually search them, stumbling on things that don't stick out from the background while chased by the spider droid, eaten by the sand snake, ''you cautiously investigate the hole'' - apparently not since you got eaten by the creature in it, timed encounters with aliens), some interface/control issues (can't skip walking animations?, can't cycle between items using the last item icon in the pop-up menu, no action hotkeys?, the pop-up menu icons are locked during animations and in-game cutscenes, when you can't perform an action on something there's an annoying pause while the game shows a cross symbol on it (and no text explaining why not, you can skip it by pressing Esc or Enter but double clicking (or it not pausing the game briefly) would've been preferable), many things lack sfx, limited options (can't shoot the cleaning robot, can't throw the grenade where you want to (such as at the star generator guard who you also can't escape from when on the same floor as him), can't run, can't jump?, Roger's kind of an idiot so you don't understand a lot of technology, can't be evil?), no clear indication of where there is or isn't an exit to an interconnected area (such as the walk icon changing or whatnot; it's not always obvious where you can walk into the horizon for example)), can't skip most in-game cutscenes?, sometimes uneven volume levels, tedious to have to redo the first cave if you forgot to turn on the translation device before meeting the hovering head at the end of it, tedious to make the droid move under the bone bridge to topple the bone piece on it, logical inconsistencies (makes no sense that you can also hide from the guards behind the traffic lights at the beginning, according to the narrator there are minor effects from combining certain items but they don't seem to actually have an effect on the game?, despite figuring out what the translator device is (by trying it on enemies) you still have to have it turned on before the end of the first cave and the description for it isn't updated, why does the floating head guy need proof of Orat's death if he's been monitoring you?), somewhat clunky droid shop interface, no journal/log feature (need to write a few things down for later), very small hit box for the ID card in the Sarien ship, can't cancel the move while Roger is walking towards an object you're trying to interact with